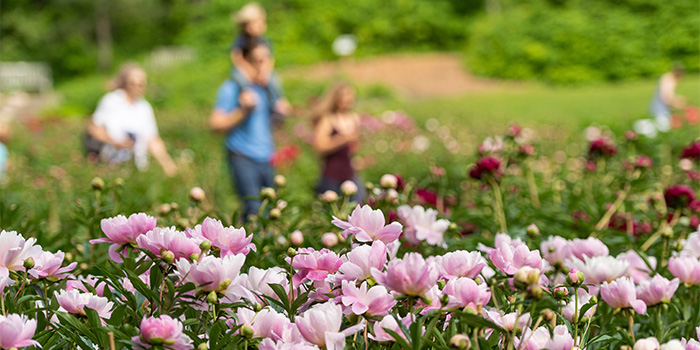 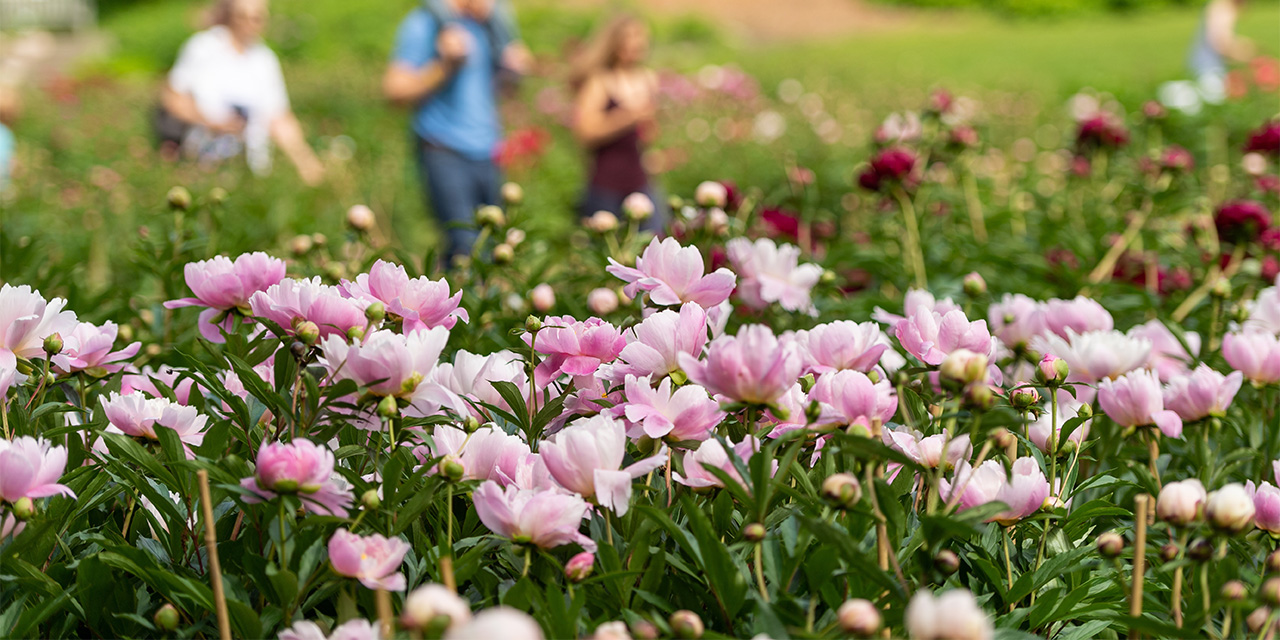 Upjohn’s significant gift has come full circle, as his family has come together on the 100th anniversary of his gift with a donation of $2 million to name the garden after its original donor. On May 19, the U-M Board of Regents approved naming the garden the W.E. Upjohn Peony Garden in recognition of collective gifts from members of the Upjohn family.

The Peony Garden has delighted the local community for nearly a century, and visiting it has become an annual spring pilgrimage for visitors from Michigan and beyond. Each year, the garden presents a stunning display, with 350 historic herbaceous varieties from the 19th and 20th centuries opening in near unison. At peak bloom, visitors are treated to more than 10,000 blossoms in shades of pink, red and white.

This meaningful space assumed form in 1922 with a donation of peonies from Upjohn, a U-M Medical School alumnus (1875) and founder of the Upjohn Pharmaceutical Company in Kalamazoo, Michigan. Upjohn donated a large, critically-evaluated collection of herbaceous peonies that established the Nichols Arboretum Peony Garden.

It is believed that Upjohn contributed peonies from his own extensive collection, as well as exceptional selections from nationally recognized experts. This initial collection has grown over the last 100 years, and the Peony Garden is now considered the largest collection of antique and heirloom herbaceous peonies in North America, with specimens that represent many of the important American, Canadian and European herbaceous peonies of the era—over half of which are no longer commercially available.

After Upjohn’s initial donation was established, the Nichols Arboretum Peony Garden opened to the public in 1927. In 1928, the U-M Board of Regents acknowledged the resolution by the Directors of the American Peony Society that recognized the Nichols Arboretum Peony Garden. This acknowledgment underscored the significance of the gift and the intent to establish a major herbaceous and tree peony collection at U-M.

In the last several years, interest in the garden has become a family affair. In 2012, Martha Gilmore Parfet, Upjohn’s last living grandchild, reconnected with the Nichols Arboretum Peony Garden. She reflected on what the peony collection meant to her.

“We’re honored that the university has cared for the peony collection for more than 90 years and proud to be part of the effort to preserve the collection for the future,” Martha Gilmore Parfet said in 2012. “Peonies were one of my grandfather’s great passions, and he would be so pleased to see how plants from his original collection are still growing, and will continue to thrive, in Nichols Arboretum.”

In 2016, Parfet made a gift of $500,000, the largest endowment gift to the Matthaei Botanical Gardens and Nichols Arboretum at the time, to help restore and protect the largest collection of heirloom peonies in North America. The gift was made in honor of her grandfather and established the W.E. Upjohn Peony Garden Endowment Fund to care for the historically and internationally significant Nichols Arboretum Peony Garden.

It was Parfet’s desire to make additional gifts in her lifetime to name the Peony Garden the W.E. Upjohn Peony Garden. She died in 2017 at age 91, before she could reach this goal.

Parfet’s children have since made additional contributions through the Martha & Ted Parfet Donor Advised Fund of the Kalamazoo Community Foundation to reach the naming goal their mother had set. Additional members of the Upjohn family have made personally significant gifts to the fund as well.

A celebration of the centennial of Upjohn’s original donation of his herbaceous peonies to U-M will take place 1-3 p.m. on June 4. The Peony Garden Centennial Celebration will feature remarks from Nichols Arboretum Director Tony Kolenic, Peony Curator David Michener, members of the Upjohn family, and others, as well as performances of peony-inspired Korean choral works and an original composition by composer-in-residence Alexis Lamb.

Upjohn was the founder of the Upjohn Company and president for nearly 40 years (Upjohn merged with Pharmacia Corp. in 1995 and is now part of Pfizer Inc.). In 1886, Upjohn invented an easily crushable pill known as a “friable pill,” which was easily crushed to a powder, to compete with the bitter and insoluble pills at the time.

Upjohn was one of 12 children and was one of four siblings who became physicians. Upjohn received his medical degree from U-M in 1875 and then practiced medicine in Hastings, Michigan, for 10 years. In addition to his medical practice, he was also a nationally noted philanthropist, known as “Kalamazoo’s First Citizen,” and his death in 1932 left the community in mourning.

A passionate collector and evaluator of herbaceous peonies, he was active in the American Peony Society, serving as treasurer for a term beginning in 1923. His personal estate near Kalamazoo held more than 600 cultivars across at least 14 acres of peony beds. Upjohn enjoyed opening his private collection to the public—free of charge—during the bloom season.

He also kept meticulous track of his peonies and privately published “Brook Lodge Gardens – Peonies.” This booklet, published after 1922, contains his articulate opinions of virtues and diverse intriguing facts, peony by peony.

“The peonies were my father’s salvation and his companions. He loved growing them; he loved talking about them; he loved picking them; he even wrote his own definitions of the different varieties and had them printed in a booklet,” said his late daughter, Genevieve Upjohn. “Peonies were picked and put into bouquets for the guests to buy. Many were given away to the public schools and colleges for graduation each year.”

William and Inger Ginsberg (above) honor parents Edward (AB ’38) and Rosalie Ginsberg with a gift to support a new building to house the Ginsberg Center for Community Service and Learning.
Published 3.24.2022
Read the Story