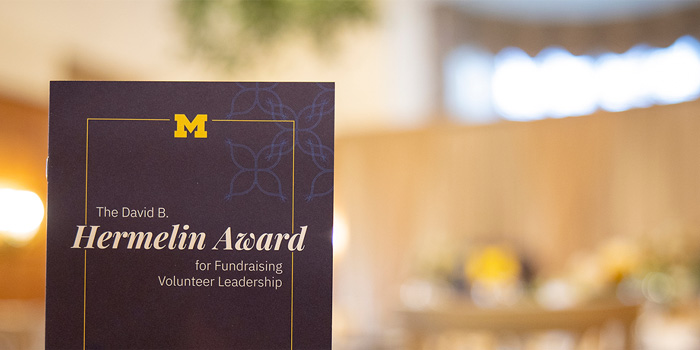 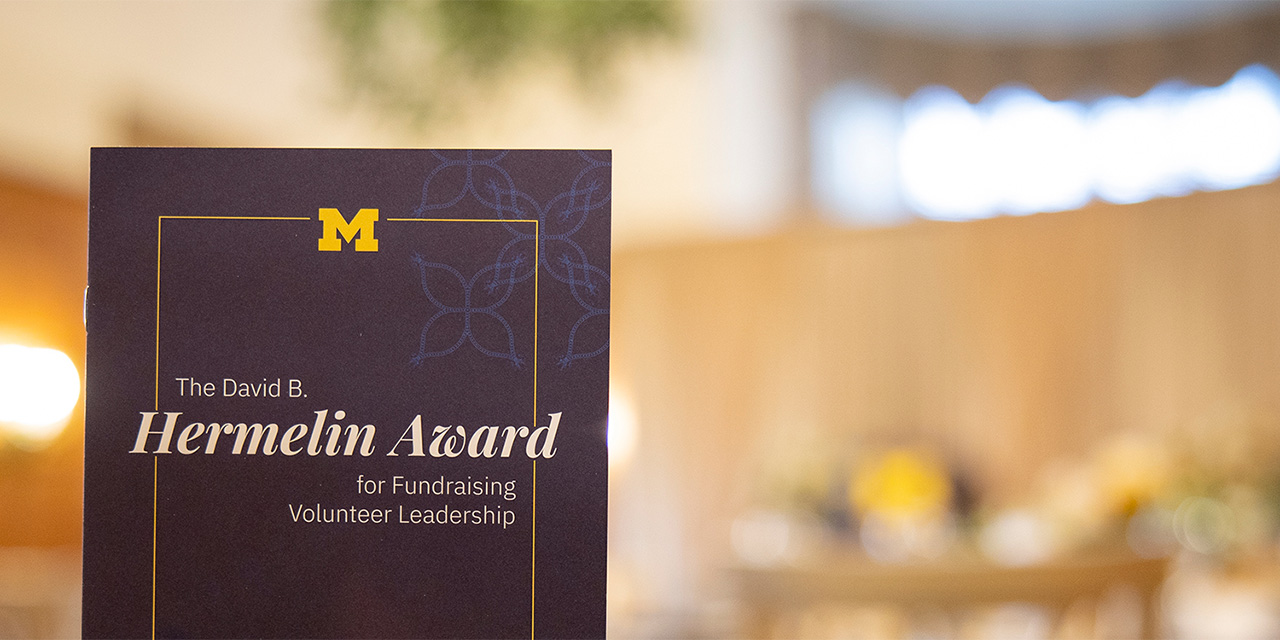 A legacy of excellence in volunteer fundraising

The quintessential champion for the University of Michigan, David Hermelin (BBA ’58, HLLD ’00) has been called “charming,” “exuberant,” “a force to be reckoned with.” A devoted alumnus, prolific philanthropist, and skilled diplomat, David had a knack for bringing people together and fostering collaboration.

“His wisdom and desire to make a difference were instrumental in introducing new supporters and helping the university engage with longtime friends,” said Vice President for Development Tom Baird. “Michigan has a strong tradition of philanthropy, empowered by David’s legacy.”

In 2000, David died from brain cancer at age 63. Although his life was cut short, the impact he had on those he met and the university he loved is still felt today. To honor his memory and his tireless and enthusiastic volunteer service, U-M established the David B. Hermelin Award for Fundraising Volunteer Leadership in 2004. It is the highest recognition for fundraising volunteers, given to Michigan’s alumni and friends who have been inspired by his legacy, and whose fundraising efforts for U-M exemplify his love for the university and his dedication to preserving it.

In 2022, four new recipients were honored with this award: 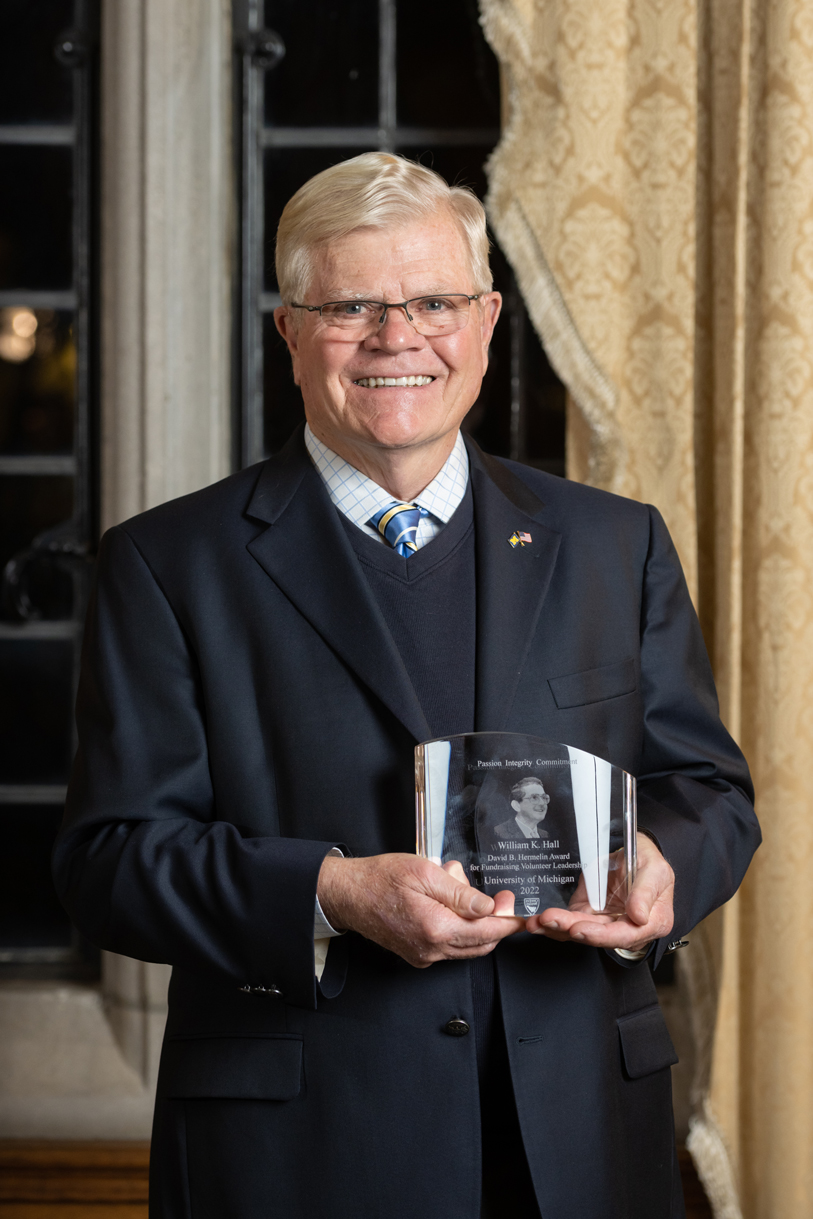 Bill Hall (BSE ’65, MBA ’67, MS ’68, PhD ’69), a Chicago-based entrepreneur who has 60 years of active affiliation with the University of Michigan, was a student at U-M during the 1960s, a tenured faculty member during the 1970s (Stephen M. Ross School of Business), and a volunteer adjunct professor from 2004–2018 (Ross School and College of Engineering). He has actively volunteered at the university in various advisory and philanthropic capacities, and he currently serves on the boards of the Michigan Medicine Advisory Group and the Zell Lurie Institute for Entrepreneurship. Bill is the recipient of the Bert F. Wertman Alumni Service Award from the Ross School (2006) and the Distinguished Alumni Award from the U-M College of Engineering (2014).

“I have always viewed my volunteerism at the University of Michigan as a partial payback for the great education that I received at the university. I firmly believe that the time and philanthropic efforts that I have contributed to the university have helped current and future generations to make our world a better place.” Bill Hall 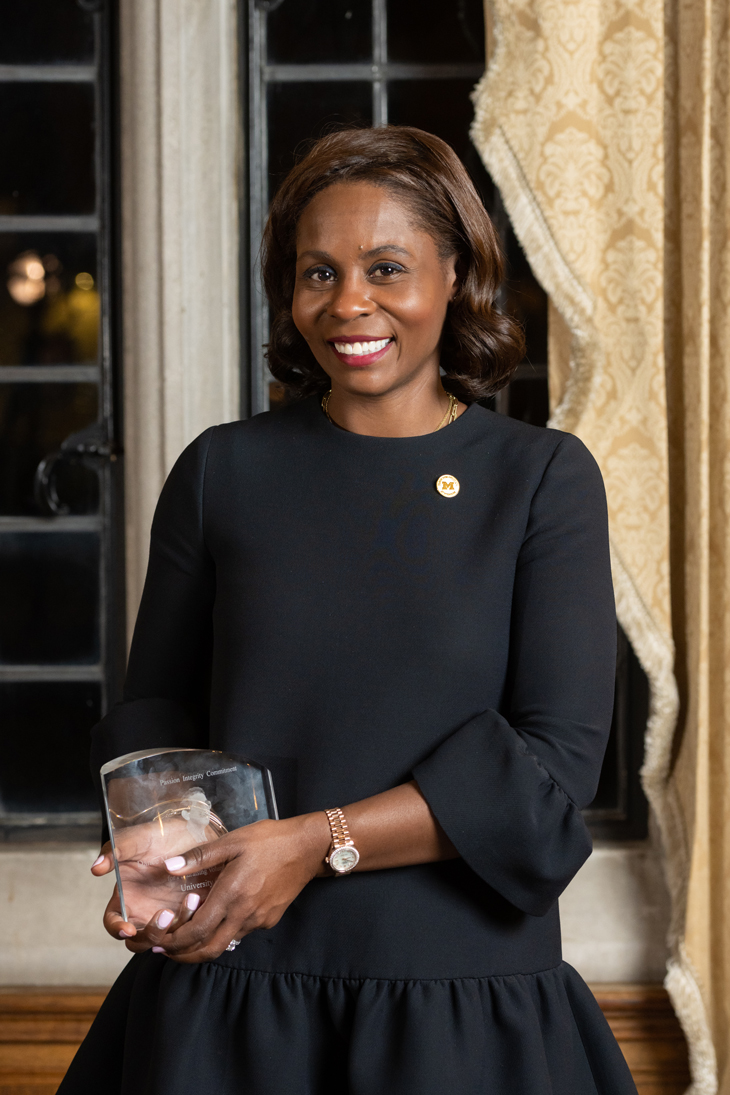 Brandi Hudson (AB ’01) joined the Bay Area Campaign Leadership Council and the Bay Area Next Gen Council in 2017, igniting her passion and commitment to her alma mater. As she began to get more involved in and gain exposure to U-M’s campaign efforts, Brandi started to notice that all of her white friends were being solicited by U-M and most of her Black friends were not. She wanted to find a way to engage more donors who looked like her and increase representation of Black donors on Michigan’s volunteer boards. With a dream in mind, she spearheaded an initiative with friends by identifying individuals in their networks who they believed had capacity to make a personally meaningful gift to U-M. She presented her ideas to Vice President for Development Tom Baird and then partnered with Ryan Robinson (former senior director of major gifts, Western States) and Kat Walsh (senior executive director, Diversity, Equity, and Inclusion, and chief diversity officer, Office of University Development) to create The Raise: Generations of Black Excellence.

“The history of Black philanthropy shows us that community is a central tenet to how we engage in giving. We give to provide access to the community. This sentiment is truly at the heart of the launch of The Raise: Generations of Black Excellence” Brandi Hudson 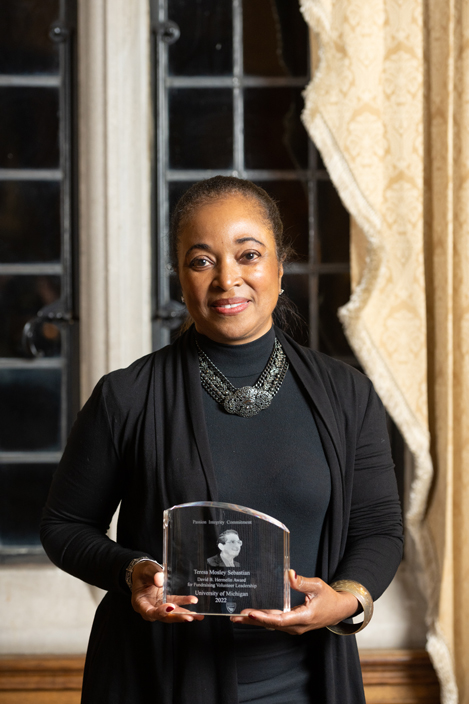 Teresa Sebastian (BGS ’78) has been a particular champion of diversity, equity, and inclusion (DEI) efforts on campus, even before we had a university-wide DEI strategic plan. In addition to becoming personally involved and providing financial support for DEI initiatives, she has solicited gifts and commitments of time from her peers. Teresa has agreed to serve as a co-chair of the newly formed Executive Committee of the LSA Dean’s Advisory Council (DAC). In this key role, she is working with Dean Anne Curzan as she addresses reorganizing the DAC to provide the college with focused strategic guidance and input. Few people have the combination of depth of knowledge about Michigan and continued willingness to say “yes” to us as we ask for help.

“I am humbled… to receive an award for something that is truly natural. My personal goal is to make vital educational institutions better for the next generation. This principle is learned from my parents… The University of Michigan gave me a place not only to learn, but to launch. I am proud and happy to contribute my time and funds to this great institution and its students.”  Teresa Sebastian 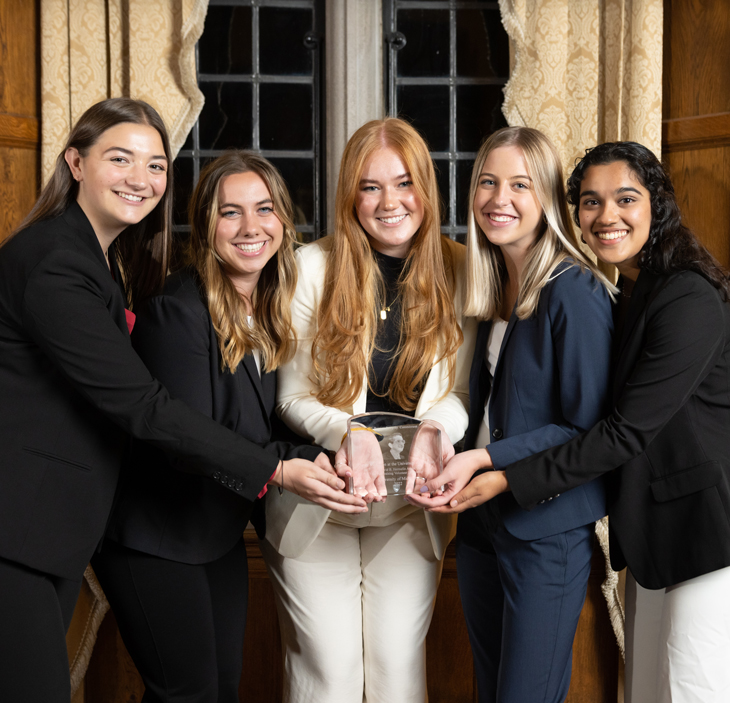 Dance Marathon at the University of Michigan (DMUM), a nonprofit student organization dedicated to supporting children with disabilities and illnesses, and their families, does a tremendous job of raising awareness of philanthropy within Michigan’s student body. As one of the university’s largest student organizations, DMUM’s current participants and its alumni are very proud of the work they have done on behalf of C.S. Mott Children’s Hospital for its pediatric
rehabilitation programs. The students who join DMUM know they are joining an organization where they will have fun and become Mott fundraising volunteers. DMUM has also opened doors for Michigan Medicine to work more closely with the students to fundraise in unique and innovative ways, particularly around Giving Blueday and within DMUM’s dancer alumni population. In just three years, DMUM has raised nearly $200,000 from over 2,500 donors on Giving Blueday by engaging in a true peer-to-peer fundraising effort on behalf of Mott.

“It is an honor to be recognized among the many philanthropic individuals who have also received this award… As the first student organization to be a Hermelin Award recipient, we hope to inspire and motivate other students on our campus to promote and pursue service in our community.”
Dance Marathon at the University of Michigan