Amid a global pandemic, U-M faculty and alumni from around the world come together in philanthropy

Hundreds of boxes of vital medical equipment, crucial in the fight against COVID-19, have arrived in Ann Arbor thanks to the generosity of U-M faculty and alumni from China.

Organized by the U-M Association of Chinese Professors (UM-ACP), the fundraiser has collected monetary gifts and donations of personal protective equipment, commonly known as PPE, to be donated to the U-M Health System and other healthcare institutes around Ann Arbor.

Many Chinese families in the Ann Arbor area have also participated, donating household disinfectants and protective equipment. Some volunteers are asking their families in China to buy and ship PPE for donations. UM-ACP describes this movement as, “Ants moving goods to A2, Go Blue!” 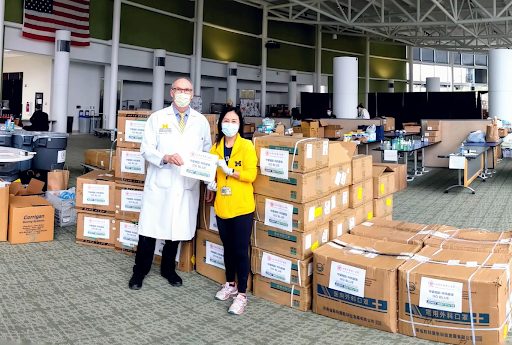 “We are proud to be a part of such a warm community and thankful for those who are fighting this pandemic alongside us,” Lu Wang, Associate Professor of Biostatistics at the School of Public Health and a member of UM-ACP, writes. “Thank you!”

UM-ACP is made up of over 400 professors of Chinese heritage across each of the 19 schools and colleges at the University of Michigan, and all three U-M campuses. Upon realizing the whole country would be short of PPE due to COVID-19, UM-ACP leadership quickly called upon their cohort for help. Within hours, 23 UM-ACP professors formed seven functional teams, taking action to move swiftly and efficiently to begin raising funds, securing donations, and coordinating shipments and deliveries.

“As members of the U-M community, we would like to contribute more besides the online teaching, mentoring, education, and research work that we are able to continue thanks to our frontline heroes at Michigan Medicine,” says Duxin Sun, J.G. Searle Professor of Pharmaceutical Sciences at the College of Pharmacy and a member of UM-ACP. “We have so many alumni all over the world. ACP is in a unique position to do this job by connecting our large UM Chinese alumni network all around the world. United we stand!”

UM-ACP also established a charity fund, which raised $65,000 in the first 24 hours and has accepted over $125,000 in monetary donations. The money raised has been used to purchase and ship PPE for the donation drive.

Helping to reach this goal is Medsyn Biopharma, a company co-founded by UM-ACP member Shaomeng Wang. Professor Wang and his partners, Dr. Arul Chinnaiyan and Dr. Gil Omenn, have pledged up to $50,000 to support UM-ACP’s efforts in reaching a first-stage fundraising goal of $120,000.

UM-ACP was founded in 2002 with a mission to promote friendship and collaboration among Chinese professors at the University of Michigan and their collaborators all over the world. It has built a support network to promote common research interests among its members, and to boost academic and cultural exchange between China and the US. UM-ACP members exchange ideas on how to collaborate in research, teaching, and education, and how to excel as an educator and researcher.

UM-ACP continues to accept donations of PPE and monetary gifts on behalf of the U-M Health System during this continued time of urgent need. If you’d like to support UM-ACP efforts, visit http://www.umacp.org.

Special thanks to UM-ACP for the featured images.