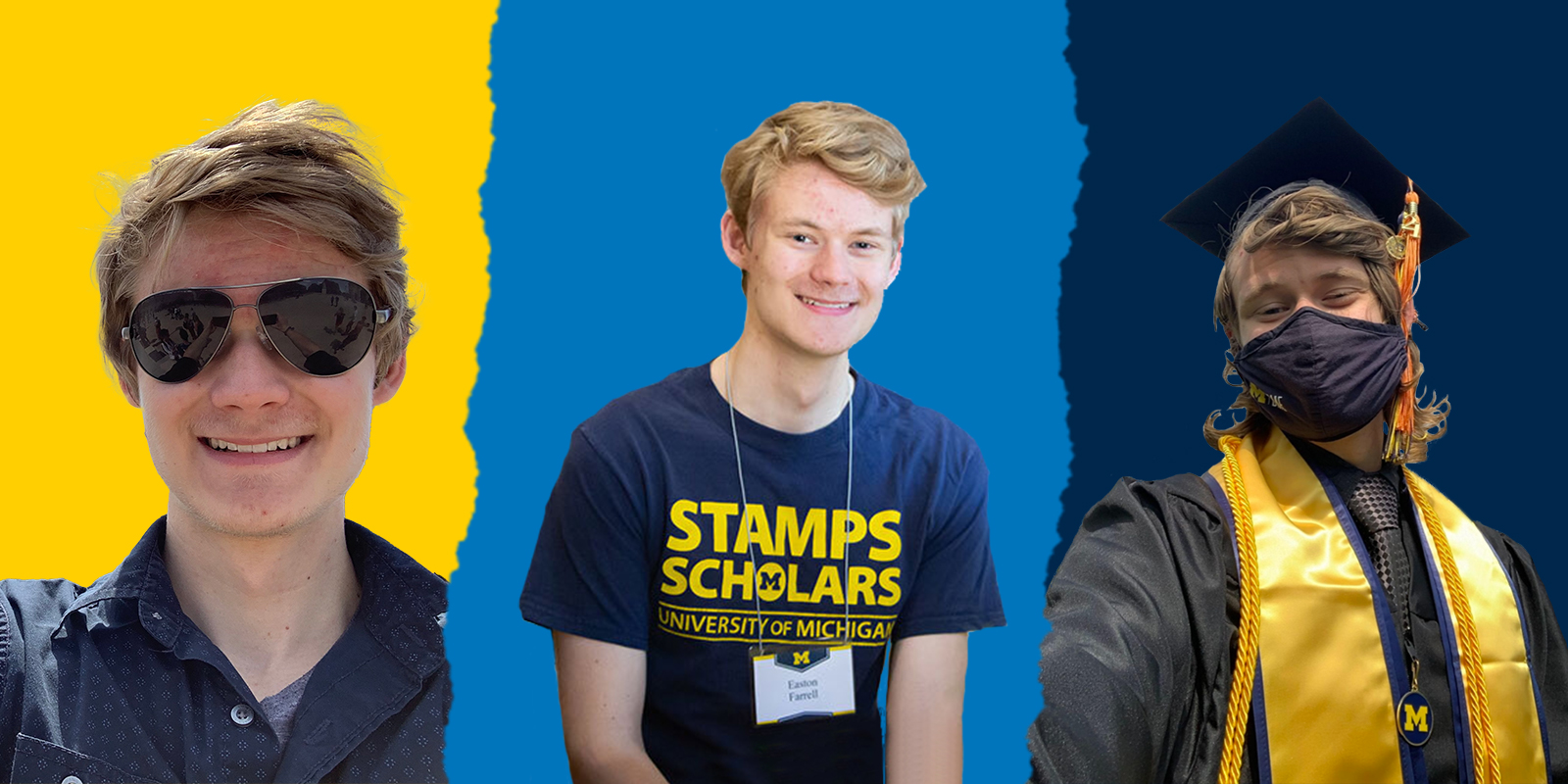 For Easton Farrell, a recent graduate of U-M’s College of Engineering, early life experiences inspired what he would ultimately pursue in college. He grew up in a tight-knit family in Grayling, Michigan, where his mother stayed at home to raise him and his two sisters while his father worked several military jobs in Grayling and elsewhere. In second grade, Easton’s mother was diagnosed with stage three breast cancer, and his friend’s mother was diagnosed with cancer when he was in high school. His mother survived, but his friend’s mother passed away. Witnessing his mother go through treatment and dealing with death at such a young age shaped his interest in biology, medicine, and research. He was thankful for the fields that have saved so many people, and he became determined to advance them.

When it came time to apply to colleges, Easton was attracted to Michigan’s world class engineering program, with the goal of pursuing a degree in biomedical engineering. But he knew without scholarship support, he would struggle immensely with the financial burden.

One evening in high school, Easton returned home from musical practice to find a manila envelope on his bed. He opened the letter to discover he had been selected as a Stamps Scholar at U-M. The Stamps Scholarship is a highly selective scholarship that provides merit-based support to promising undergraduate freshmen admitted to U-M.

“At first I thought it was fake, since I hadn’t even applied. I had no idea what it was, and I couldn’t believe I was chosen,” Easton said. “Coming in as a first-generation college student, I didn’t really have plans as to how I was going to pay for school, and this scholarship completely alleviated that worry.”

Thanks to the Stamps Scholarship, Easton was able to fully immerse himself on campus, beyond his experiences in the classroom. As a freshman, he joined the Undergraduate Research Opportunity Program, conducting innovative research centered on manipulating cellular behaviors. Getting involved with research early on inspired him to continue working in the lab all four years; most recently, he researched possible novel therapies for people with internal lacerations, hemorrhaging, and fibrosis.

When he’s not engrossed in research and publishing scholarly articles, Easton serves as an instructional aid for a thermodynamics class; performs in free concerts with his a cappella group, Good News; participates with the Engineering Honors Program; and works on his latest project—writing a novel.

Enrichment funds from the Stamps Scholarship even enabled Easton to travel to Ireland and Belgium to study abroad, where he learned about his rich family history.

“It turns out that our family is ancient royalty in Ireland, so I found my family’s ancestral castle built in 1,000 AD and visited it. I walked 17 miles across the Irish countryside to find it. It was an incredible experience,” he said.

This summer, Easton began his PhD in biomedical engineering at Michigan. Positive experiences with his professors at the College of Engineering and his time spent as an instructional aid inspired him to want to become a professor and researcher, eventually educating the next generation of biomedical engineers.

“I’ve always been interested in research, but I also want to pursue a career that allows me to give back to others,” Easton said. “If my research can have an impact on others and lead to the advancement of the biomedical engineering field, that would be extremely rewarding.”