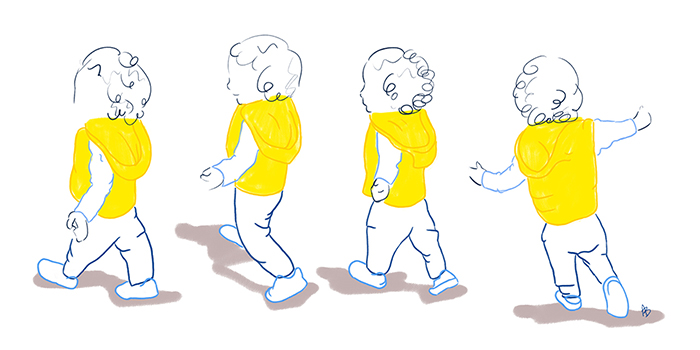 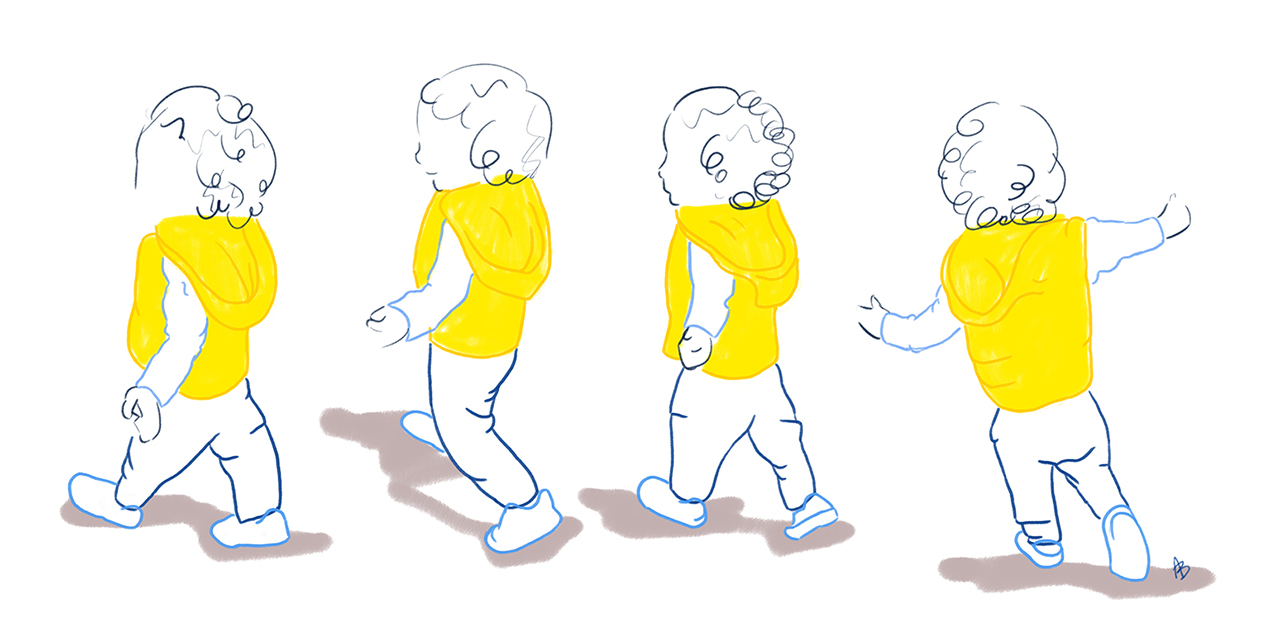 Raising a toast to a fighting spirit

This story contains references to infant loss, death, and dying that some may find upsetting.

Miles DiGiannantonio was a miracle from the very beginning. In December 2019, his parents Andy Steinhoff (AB ’02) and Mike DiGiannantonio (AB ’00, JD ’03) learned during a routine ultrasound that Miles’ amniotic sac had ruptured, and that he did not have enough fluid to support healthy lung development. He was given only a five percent chance of survival.

But Miles had a strong heartbeat, so they began praying for a miracle and encouraging him to “keep fighting,” words Andy would often whisper to her unborn son.

Despite all odds, Miles Giovanni DiGiannantonio was born prematurely on March 30, 2020, with a fighting spirit. After three months in the NICU, Miles finally came home, without the assistance of oxygen. During his first year, Miles overcame every challenge that his prematurity presented. Soon, he was chasing after his older sister, Emerson; running after the ball at her soccer games; climbing on everything in sight; and exploring his love for trees in his favorite place—the outdoors. 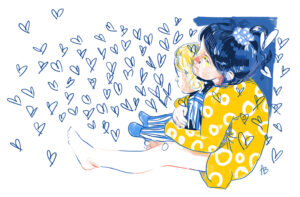 “Miles was more than just a miracle, he was magic,” Mike said. “He was a wonderful little person—a ferocious hugger who marveled at everything his big sister did. He could only say ‘Mama’ and ‘Dada,’ but he smiled and laughed as though he was in on every joke.”

A feisty and vibrant young boy, Miles celebrated life, even insisting his family raise their glasses to him every night at dinner saying, “cheers!”

“He watched us do a toast before every meal for so long, and when he finally had his own bottle that he could hold, he was so excited to finally join us,” Andy said. “So we’d toast him like five times a meal. He thought it was the best thing ever.”

Currently residing in California, Andy and Mike have always had strong connections to the state of Michigan and the university, both growing up in Grand Blanc and graduating from U-M. Andy also currently works as a West Coast major gift officer for U-M’s College of Engineering. Naturally, they introduced Miles and Emerson to their love for Michigan, hoping one day to bring them to campus and Camp Michigania, a summer camp that provides Alumni Association members and their families recreational and educational activities in Northern Michigan.

But, tragically, that dream was cut short.

In December 2021, Miles died unexpectedly after being admitted to a Los Angeles hospital with a cough. He was 20 months old. Throughout his 25-day hospital stay, he continued to show that same strength and resilience that brought him into the world against all odds.

“Words can’t describe it,” Mike said. “It is an out-of-order loss that I don’t think anyone can comprehend. I don’t think we’ve wrapped our minds around it and the full shock of it all.” 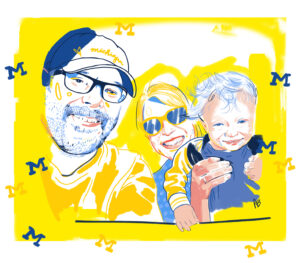 For Andy and Mike, one of their greatest fears after losing Miles was that their son would be forgotten for his short time here on Earth and that his name would go unspoken. Searching for a way to honor Miles’ life and his valiant spirit, they turned to a place they both hold dear to their hearts, a place they knew Miles was sure to love—the University of Michigan. Earlier this year, they established the Miles DiGiannantonio Fighting Spirit Memorial Fund for Mott Families at Camp Michigania.

The fund will be used to support the Mott Family Program at Camp Michigania, which allows families of children at C.S. Mott Children’s Hospital to attend a week at camp without the worry of a financial burden.

Camp Michigania Director James McRae said this gift makes a big difference for Mott families who, either due to time spent in the hospital for treatment or medical costs, wouldn’t get to experience a place like Michigania.

“The fact that this gift is in the name of baby Miles is an honor for us,” McRae said. “Michigania would have been a place where Miles thrived, and now many others will get that opportunity because of him. So we thank Andy and Mike, not only for their very generous gift, but for sharing Miles’ story with us and letting it be an inspiration for our entire Michigania community. There are no words that can express our gratitude.”

McRae said because of generous donors like Andy and Mike, Camp Michigania is not only able to bring Mott families to camp, but they can also provide a medical professional that is dedicated to the program, as well as staff members from Mott that provide a familiar face and liaison for the families. Camp staff is also able to modify programming to accommodate all participants.

“Bringing the Mott families to camp is a great energy booster for our staff, as they love making this the most magical week of these families’ year,” McRae said.

Mike and Andy enjoyed sharing their love for U-M with Miles, whether he was running around outside in maize and blue or cheering on the football team from home with his family. They had hoped to one day bring Miles to Camp Michigania, where he could bask in the outdoors and all things Michigan. Though they never got the opportunity to visit Michigania (or the state of Michigan at all) with Miles due to the pandemic, Andy and Mike were inspired to support other kids like him—kids with that same fighting spirit.

“For somebody like Miles who has spent time in those hospital rooms, not being able to go outside and not being able to be in the fresh air and with their family … we wanted to find a way for those kids and their families who fight through difficult times in the hospital to be able to enjoy nature together as a family,” Mike said.

“We wanted his life to be remembered and to be associated with helping others that have also overcome adversity and fought through insurmountable odds,” Andy said.

At Camp Michigania, Miles’ legacy will not only live on through children like him who come to experience camp, but through one of his favorite rituals—raising a toast. As part of their gift, Andy and Mike requested that recipients of the fund give a “cheers” to Miles, raising their glasses to him before sharing a meal at camp.

“For us, it feels like a very small part of Miles will go to camp with these kids—he’ll finally get to go,” Andy said. “By saying his name out loud when they’re there, they’ll take a little piece of Miles to Camp Michigania with them. And the miracle of Miles will live forever.” 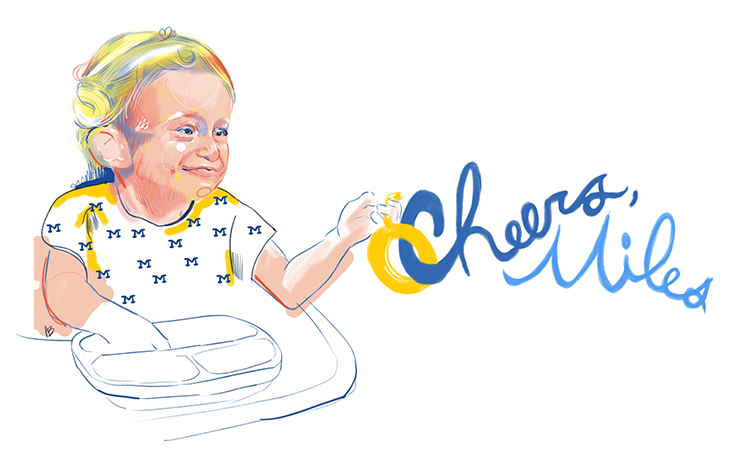 Schools of the future

Despite the problems facing education, Elizabeth Birr Moje, dean of the School of Education, believes that out of turbulence and disruption can come transformative educational opportunities. And transforming the landscape is exactly what she and the school are setting out to do.
Published 9.13.2022
Read the Story

Celebrating the impact of Black philanthropy at U-M.
Published 8.29.2022
Read the Story