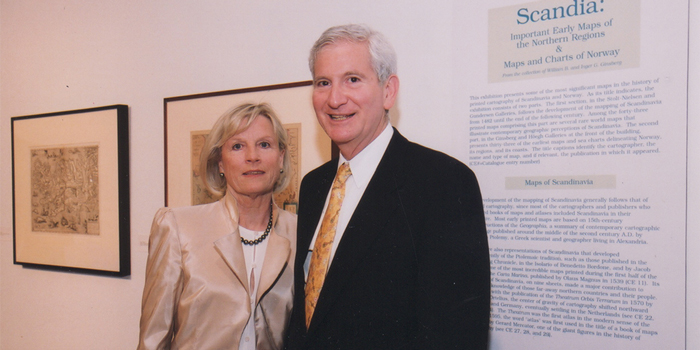 Edward (AB ’38) and Rosalie Ginsberg were committed to making a difference. When it came to community involvement and making a positive impact on society—whether helping communities in Israel or supporting organizations in their hometown—the Ginsbergs dedicated themselves to helping others.

“My parents were always supportive of the various communities in which they were involved,” said William Ginsberg. “They shared this involvement, and it represented a continuation of the values and traditions they learned from their parents. Hopefully my brother and I and our families are maintaining those values and traditions.”

In 1999, William and Inger Ginsberg gave $5 million to endow the Edward Ginsberg Center for Community Service and Learning (Ginsberg Center). This year, to further honor his parents’ legacy of service, William and Inger have given $10 million to U-M’s Division of Student Life to support the construction of a brand new home for the center. On March 24, the Board of Regents approved the Edward and Rosalie Ginsberg Building name in recognition of the gift.

“My father was a Michigan graduate and was fond of the school and his experience there,” William Ginsberg said. “By making the initial donation two decades ago to name the Center for Community Service and Learning after him, and now funding the Edward and Rosalie Ginsberg Building to house it, we honor my parents by encouraging and helping others to make their own contributions to the betterment of individuals’ lives and our broader society.”

The new, 11,000-square-foot Edward and Rosalie Ginsberg Building will replace the Madelon Pound House on Ann Arbor’s central campus. The name of Madelon Pound will be honored within the new space.

The new building will provide the opportunity for increased collaboration among faculty, students, and community partners. It includes a spacious, flexible area that can accommodate large groups, as well as a resource library, student organization space, and administration areas. The new space will enable greater engagement with students and faculty, including a more robust menu of programming, training, presentations, events, and learning opportunities.

The Ginsberg Building will incorporate a geothermal exchange system to increase energy efficiency, making it among the first net-zero-ready structures on campus. Some additional sustainability features will include passive design, high-performance systems, and energy conservation elements; materials and systems with low-embodied carbon to reduce the total carbon footprint of the facility; low-flow plumbing fixtures to reduce water consumption; an open and inviting interior environment that connects occupants to the natural world; and an irrigation-free landscape with native and drought-tolerant plants. The building will serve as a replicable model of sustainable design to inspire others.

“This gift transforms our ability to serve as a connection point for faculty, students, and staff as they engage with community partners in our region,” said Martino Harmon, vice president for student life. “Students specifically will use the skills they develop at the Ginsberg Center to go out into the broader community after graduation, making a difference as the Leaders and Best.”

“We’re so grateful for William and Inger’s gift to support the new Ginsberg Building,” said Neeraja Aravamudan, director of the Ginsberg Center. “This gift helps us continue to be a resource for those that are dedicated to positive community impact, and the new building will expand our organization’s capacity to offer activities that foster lifelong commitments to actively engaging with communities and reflect Edward Ginsberg’s dedication to community involvement.”

About the Ginsberg Center

The Ginsberg Center has served as a hub for community and civic engagement for decades. Since its inception, it has cultivated a national reputation for preeminence in learning through community engagement, involving students and faculty in its efforts. The Ginsberg Center empowers people to be catalysts for positive change through social justice education; scholarships and grants to student organizations and faculty; alternative breaks; and a multitude of educational partnerships.

In 2019, before the pandemic affected operations, the Ginsberg Center engaged more than 4,240 U-M students to serve nearly 300 community partners in schools, government agencies, and nonprofit organizations. Through their service and reflections, the students learned about themselves, their communities, and their roles and responsibilities as citizens and future leaders of the world. The Ginsberg Center also engaged more than 300 faculty, supporting the incorporation of campus-community partnerships into their class curriculum, programs, and research.

About the namesakes: Edward and Rosalie Ginsberg

Born in Brooklyn, New York, Edward Ginsberg moved at a young age with his family to Cleveland, Ohio, where he grew up. He received his Bachelor of Arts from the University of Michigan in 1938 and his Juris Doctor from Harvard University in 1941. He met Rosalie, who was from Cleveland, when he was in law school and she was in college in Boston. They returned to Cleveland and married in fall 1941, and he practiced law there for more than 50 years.

Edward Ginsberg devoted himself to Israeli and Jewish activities in the U.S. and around the world, playing an important role raising funds to support the State of Israel. He worked directly with world figures including Golda Meir and Yitzhak Rabin. Edward Ginsberg never forgot his hometown, staying engaged with the Cleveland community by serving as a lifetime trustee of the Jewish Community Federation of Cleveland, among other roles. Edward died in 1997, and Rosalie died in 2011.

William Ginsberg said his parents truly lived a life dedicated to serving others.

“Although much of their charity and related activity focused on Jewish organizations and the state of Israel, this was part of a larger sense of obligation to give something back to society, to help those less fortunate than themselves. Importantly, they both devoted a good deal of time in pursuit of making life better for others,” William Ginsberg said.

“In giving and asking others to give money to worthy causes, my father always said: ‘Don’t give until it hurts; give until it feels really good!’”

About William and Inger Ginsberg

Following in Edward and Rosalie’s footsteps, William and Inger have carried on the tradition of service to society. As philanthropists and loyal supporters of the university, they have been widely involved at U-M for decades, generously giving more than $16 million to U-M in support of five areas of the university: the Division of Student Life; the College of Literature, Science, and the Arts; the School of Music, Theatre & Dance; the William L. Clements Library; and the Rackham Graduate School.

In addition to the original endowment establishing the Ginsberg Center, they gave a $1 million endowment to establish the William B. Ginsberg and Inger G. Ginsberg Graduate Student Assistant Fund, providing aid for graduate students working through the Ginsberg Center to support faculty and community-engaged scholarship. They also established the Rosalie Ginsberg Scholarship for Community Service Scholars Fund for U-M juniors and seniors from their hometown of Cleveland who share the Ginsbergs’ love for service and learning. In addition, they established the Rosalie Ginsberg Community Fellows Fund, which supports undergraduate leaders of tomorrow who carry with them an ethic of service and community problem solving.

At the College of Literature, Science, and the Arts, they created the Inger G. & William B. Ginsberg Scholarship Fund in Math, providing support for undergraduate students majoring in mathematics. The Ginsbergs have also supported faculty and various productions at the School of Music, Theatre & Dance.

Students, faculty, alumni, and friends gave more than $4.3 million to support what they love about U-M during the 24-hour day of giving.
Published 3.23.2022
Read the Story