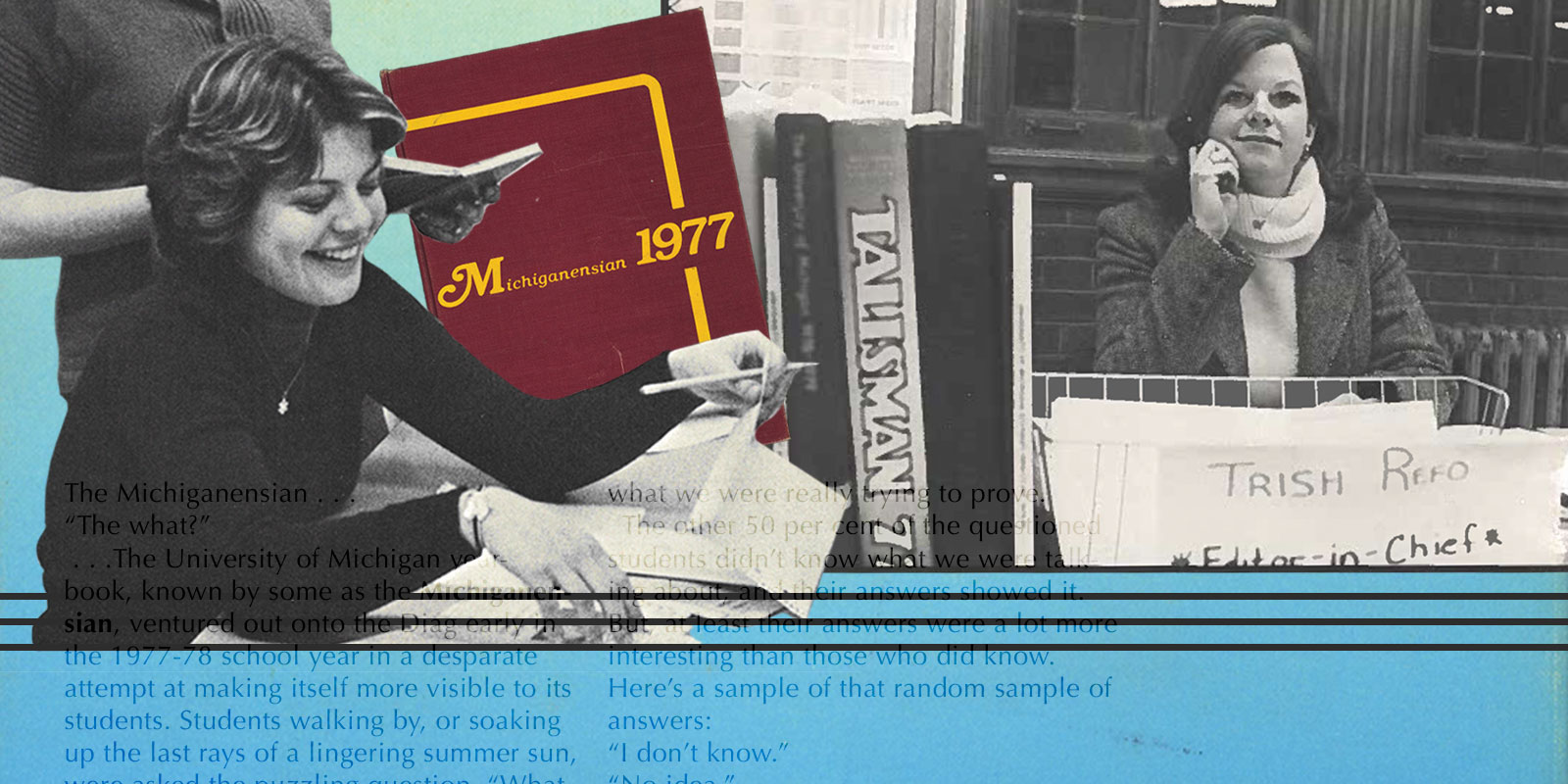 Arriving as students at the University of Michigan, Deborah Lacusta (BGS ’79) and Patricia Lee Refo (AB ’80, JD ’83) both had early hopes for a career in journalism. Those aspirations soon brought them to U-M’s Stanford Lipsey Student Publications Building, where they worked together throughout their undergraduate years to help create the Michiganensian Yearbook. Though they went on to live divergent lives, Deb as a TV writer known for her work on “The Simpsons,” and Trish as the president of the American Bar Association, their love and support of U-M has reconnected the pair. In a conversation with Leaders & Best, Deb and Trish reflected on their formative years at U-M and how a desire to give back allowed them to regain touch as old friends.

Leaders & Best: Could you tell us about your journey to U-M?

Deb: I’m from a working-class family from East Detroit (now known as Eastpointe) and the first in our family to go to college. Back then, going to Michigan wasn’t as expensive, and I had an English teacher who went to Michigan and encouraged me to apply. She said I should stay at Betsy Barbour, which is an all-girls dorm, so I went for a preview weekend and loved the campus.

Trish: That’s a great story. I ended up being an RA at Betsy Barbour when I was in law school, so there’s another connection!

I grew up in Virginia but went to high school in Grand Blanc, Michigan. I had a really scientific way of deciding where I went to school. I applied to three universities in the state of Michigan. Two of them invited me immediately into their honors college, and the University of Michigan didn’t. So I decided to go to Michigan to prove they were wrong. I did okay in my first semester, so I made an appointment with the chair of the Honors College, who was the famous Otto Graf, to make my point that I should be in the Honors College. Before I could make my statement, he held up his hand and said, “before you say anything, I have something to say to you.” I remember thinking he was going to tell me no before I could even make my case. But he said that I was admitted to the Honors College when I applied to U-M, but they forgot to send me the file.

L&B: How did you both get involved with The Michiganensian?

Deb: Betsy Barbour is right across the street from the publications building. It was just kind of natural to see what was going on in town, and I had worked on the yearbook in high school. I joined as a copywriter during my sophomore year, and I met Trish in my second year when I was a copy editor.

Trish: I wanted to get involved with something outside of just classes. So I went and made an appointment with the then editor of the yearbook when I was a freshman, talked my way on to the staff, and stayed for four years.

Deb: I don’t think there was a formal journalism department at that time, but I really wanted to do feature interviews. One day I remember the editor assigning me to go interview a well-known campus leader. From there, he would just send me off, and I would do these interviews. I really liked doing that.

Trish: I went off to college thinking I was going to do journalism, and then I got sidetracked into political science and, ultimately, law school. To me, one of the great things about U-M was the opportunity it gave me to just expose myself to things I’d never been exposed to before. The great joy of going away to college is thinking you know what you want to do and getting the chance to test all sorts of other paths as well.

L&B: Did you receive any scholarship support while you were at U-M?

Deb: I would get grant money every year from the State of Michigan, which was really helpful because I had to work a couple of part-time jobs, and then there were always postings on the bulletin board in the English department to apply for journalism and creative writing grants. I submitted a story I wrote for class and actually got published in a newspaper, and I received some scholarship money from that!

Trish: Mostly, it was just my dad paying for college, and I also worked as a resident advisor and then a resident director in law school to help with the cost of being there. But also, it was so much less expensive to go to college then. I feel for students today with the loans they have to take out. My debt was nothing compared to what students have now. Having to shoulder that while starting a new career is not an easy thing to do.

L&B: What did your undergraduate years mean to you?

Deb: I like what you said, Trish, about being able to dabble and find a lot of different avenues you hadn’t normally been exposed to. I had done a lot of theater in high school, and when I got to Michigan, I remember auditioning for this crazy play that was so much fun and making student films for classes. All those experiences opened my thoughts to what I could do, and I discovered that the key element for me was writing. If I could write, I could kind of do whatever I wanted, and that’s what led me to my career.

Trish: I think you’re exactly right. Learning to write is the foundation of just about everything. I did a ton at Michigan in many different disciplines, but one of my favorite classes was taught by Bert Hornback, one of the leading experts on Charles Dickens. He made us write in class every single day, so you had to come to class prepared with what you were going to write in your head. That kind of drilling about putting your thoughts into words was transformative for me. Everything foundational to how I write I learned at U-M. I’d like to think I’ve learned a few things since, but the writing foundation the university gave me launched me into my career.

Deb: I remember a really great English class called horror fiction taught by Ira Konigsberg, where we would read horror classics and then watch the movie, and it totally informed what I do now in looking at the written word and seeing how it translates to the stage, TV, or film.

Trish: Do you ever go back to read one of your old English texts from college and look at what you underlined in the margins and just sort of go “oh geez, that’s what I really thought?”

Deb: Right! It’s really funny to look back and see what skewed our perspective back then.

L&B: How did you reconnect with the university and start giving?

It’s not something I thought about while I was at Michigan. As a student, I think I was clueless about philanthropy. I didn’t think about it in any strategic way until much later. But I was so formed by my experiences both as an undergraduate and a law student that, honestly, as soon as I was asked the answer was yes, of course. Why wouldn’t I give back to this place that has literally created me as an adult?

Deb: It started for me when I was visiting my brother who lives in Troy, Michigan and stopped in Ann Arbor. My husband Dan and I were working on a musical, and I loved the theater school, so I thought I should set up an appointment with the head of the school and also call the publications people and see about getting to talk with the kids about writing. So that was my first connection, coming back to meet with students who were from all different disciplines. From there, I just kept in touch with whoever the alumni coordinator was. It meant a lot to me when I was a student and student publications would bring in a guest lecturer. I remember Dan Rather spoke at one of our journalism classes, a small seminar, and I thought it was amazing.

So I think that’s when I started giving to U-M. Just because, like you said, Trish, it just gave me all these different experiences that I would normally never have.