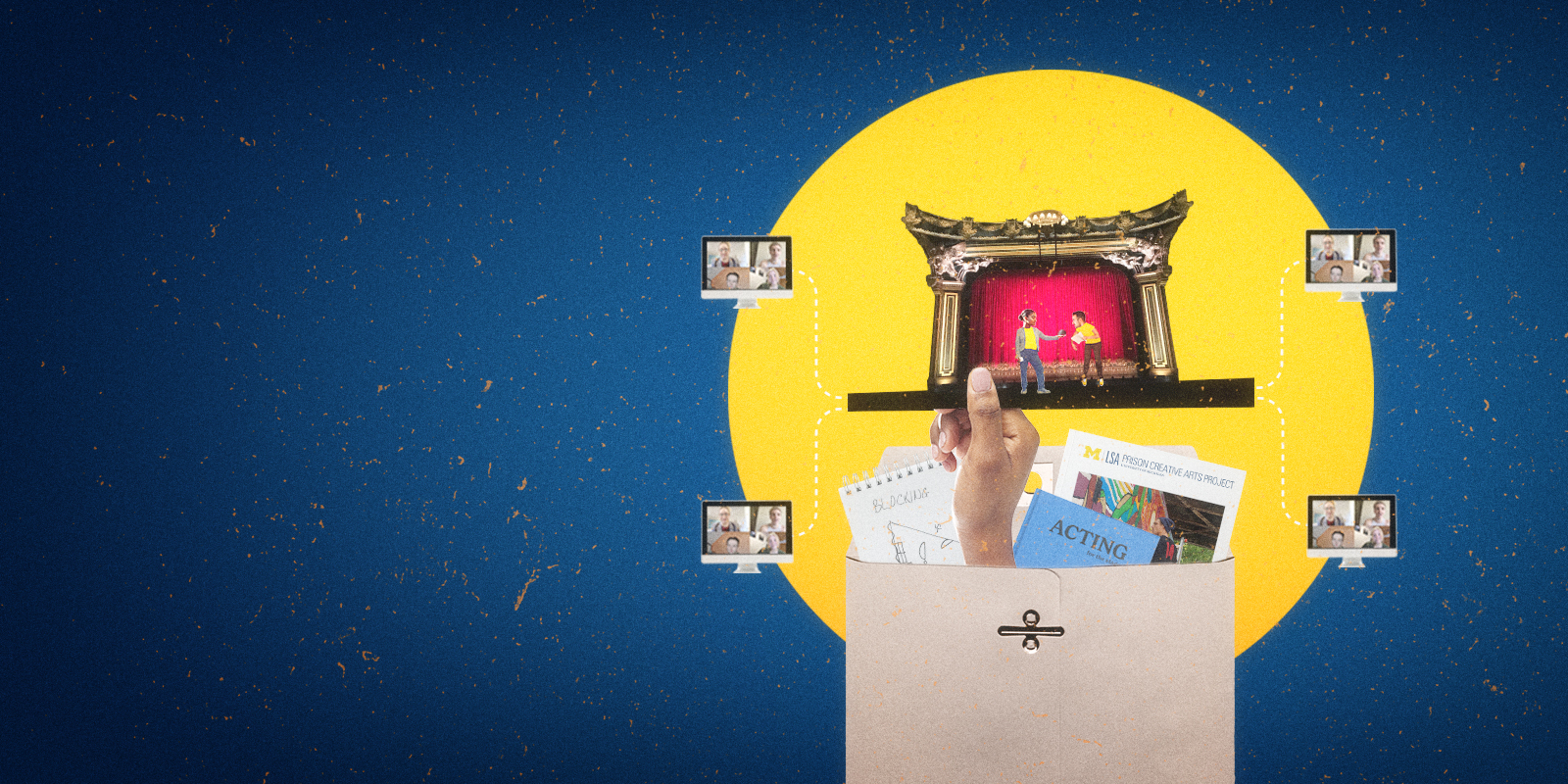 Volunteer Cindy Wenig was inspired to create the Prison Creative Arts Strategic Fund after her experience with the program.

Working as a corporate lawyer in New York City for 20 years, Cindy Wenig admittedly didn’t have a background in criminal justice. It wasn’t until she volunteered for an online course through U-M’s Prison Creative Arts Project (PCAP) that she was inspired to change the trajectory of her professional life, focusing on criminal justice reform.

Last fall, Cindy had the opportunity to volunteer as a virtual facilitator with PCAP’s Atonement Project course, despite living in California. When the pandemic prohibited in-person visits to the prisons, PCAP switched to a correspondence-course style and virtual format, allowing volunteers like Cindy to participate from all over the world.

Moved by her experience with PCAP and committed to prison reform and restorative justice, Cindy and her husband Devin recently made a gift to establish the Prison Creative Arts Strategic Fund at U-M. The fund will be used to provide discretionary support to PCAP’s mission of bringing together members of the university community and people whose lives have been shaped by the criminal justice system into meaningful collaborations for mutual learning and growth. PCAP instructor Associate Professor Ashley Lucas says the fund’s support for co-instruction is particularly important because it allows students to learn directly from instructors who have been incarcerated themselves.

Leaders & Best talked with Cindy to learn more about her time with PCAP and the inspiration behind her family’s generosity.

Leaders & Best: How did you initially get connected to the Prison Creative Arts Project?

Cindy Wenig: My daughter was applying to college theater programs, and Michigan’s is one of the best in the country. She was especially interested in the Prison Creative Arts Project (PCAP) where she could combine two of her interests—theater and prison reform. My daughter ultimately enrolled at a different university, but I wound up on PCAP’s mailing list. Over the summer I received a survey from U-M asking if I’d like to be involved as a PCAP facilitator for Ashley Lucas’ Atonement Project class. My family has no affiliation whatsoever with Michigan, but it seemed like a unique opportunity to become an online student and help out.

L&B: Did you have any prior background in criminal justice work?

CW: My legal career focused on corporate law, so I did not have much exposure to criminal law or the prison system. I had never done anything philanthropically with criminal justice organizations, as we had mostly centered our philanthropy on education and the arts. My interest in criminal justice reform started with my daughter’s interest in the subject, but it became personal to me through the Atonement Project course.

L&B: What was your experience like as a volunteer facilitator for the Atonement Project course?

CW: I participated in the theater workshop. Brilliantly, Ashley Lucas and other PCAP leadership created a written-based theater class to accommodate COVID restrictions. Instead of visiting the various prisons to host theater workshops, our teams of students and volunteers put together packets of arts activities that were mailed to the prisons weekly. We asked the prisoners questions and provided activities and prompts for them to do alone in their cells, such as writing a monologue, making a drawing, etc. The prisoners worked on the materials, creating their own theater and art, and mailed their written work back to PCAP. Everyone also read Lucas’ book, Prison Theatre and the Global Crisis of Incarceration, to discuss as part of the course. PCAP worked hard to pivot to a mail-based class so this important learning experience would not be lost.

CW: The Michigan students were not only brilliant, they have such high emotional intelligence. Both the students and the incarcerated individuals took the class very seriously. It was educational for everyone involved; the students learned from the prisoners as much as the prisoners learned from the students, so it was a two-way street. Hearing these individuals’ stories and lessons learned on the inside was incredibly moving, and seeing prisoners using theater as an outlet for their emotions showed me how important art can be to criminal justice reform. Seeing the artistic and the literary capabilities of people who were writing to me from prison, I realized the power of art to help drive hope and help prisoners to reflect on their lives now and after incarceration.

L&B: What are some of your favorite memories as a facilitator?

CW: The most unbelievable thing about the class were the participants, which consisted of Michigan students, formerly incarcerated individuals, outside volunteers like me and the prisoners who we corresponded with. I’ll never forget the first day of Zoom class. I met a classmate (who had been formerly incarcerated) and I asked him who the artist was of the beautiful paintings I saw behind him on the wall. He revealed that he, in fact, was the artist, and he just lit up with joy. We became instant friends.

I also remember one of the reflection prompts in the activity packets for the prisoners asked, “What would be your perfect day?” and one person responded, “I would bring my son with me to the beach, and I would show him all the shells. I would talk to him so he understood that his path should be different from mine.” The prisoners’ willingness to tell such personal stories, and their ability to use art and theater as a vehicle of expression was incredibly moving.

L&B: What inspired your recent gift to establish the Prison Creative Arts Strategic Fund at U-M?

CW: When Michigan went under an isolation lockdown due to the pandemic, the students in the PCAP class Zoom were disappointed. They were concerned about their ability to make it through the pandemic and the rest of the semester. At that point, everyone on the Zoom began mentoring everyone else, from the former prisoners to the students and volunteers—we were all sharing advice to help the students get through it all. The formerly incarcerated people in the class had the most to share. It was this beautiful funnel of care and collaboration, and it was at that moment that I decided to further support PCAP.

L&B: What do you hope will be the impact of your gift?

CW: I am grateful for the opportunity to participate in the PCAP course alongside the prisoners and U-M students, and I want to help make it possible so that others can experience what I did and hopefully, join our effort to advance prison reform. For students at Michigan to have exposure to this program, whether it’s virtual or in person, it’s the most meaningful education that a person can experience. And although my family’s unsolicited gift was a starting point, I would like to make others aware that PCAP exists and that it needs funding to continue the great work that it does.

L&B: What do you see as the role of programs like PCAP and the Atonement Project course?

CW: We all learned that art is a way to show the world that more must be done to address prison and criminal justice reform so that incarcerated individuals can be treated with dignity by all and integrated back into society.

L&B: Do you plan to stay involved with PCAP in the future?

CW: This gift was an initial one and is was not intended to be the extent of my family’s philanthropy for PCAP at Michigan. Since taking the class, I’ve joined the advisory board of three non-profits in the criminal justice realm, and I look forward to making additional connections for PCAP. PCAP is an impactful opportunity for U-M students, parents or alumni to advance racial and criminal justice reform alongside incarcerated people.

Click here for more information about PCAP and the Atonement Project course.