The late Irma M. Wyman (BSE Math ’49, TeachCert ’49, DEng Hon ’07) arrived at the University of Michigan in the waning years of World War II. Her parents, a working-class couple from Detroit, hesitated to send her to Ann Arbor. They expected her to graduate high school, work for a few years, and then marry. But with most young men off to war and rare opportunities for young women on the table, a Regents Scholarship offer from U-M sealed the deal. Irma enrolled in the College of Engineering, making her one of only seven women in her class. To make ends meet, she held down jobs as a waitress and a switchboard operator in her residence hall, “living as leanly as I could and working as much as I could, wherever I could.”

I grew up being told that I would never go to college, that I shouldn’t get my hopes up, that there would be no possibility of me doing that.”

At school, it quickly became apparent that she was up against the odds of her time and place in the world. For a young woman with her aspirations, discrimination was a common fact of life. Incredulous professors told her that her grades were irrelevant; they wouldn’t pass her because women simply shouldn’t be engineers. Her mother even received a letter from the dean of women expressing profound disapproval of Irma’s choice of major. But Irma was equipped with the force of character that makes it impossible for a person to yield in the face of adversity. More than that, her detractors only motivated her to succeed. “I felt that if I gave up, I would be rewarding all these people who said I couldn’t do it, I shouldn’t do it,” she said.

True to form, she didn’t give them the satisfaction. Instead, she graduated—one of two women in her class to do so, alongside lifelong friend and fellow U-M supporter Mildred “Dennie” Denecke (BSE Phys ’49).

Following graduation, Irma went on to work on several of the very first programmable computers. Her passion for an emerging technology made her a pioneer in a blossoming field and, despite facing the same obstacles in the workplace that she faced at U-M, Irma’s steadfast determination bloomed into hard-earned success. She would eventually become the first female vice president of Honeywell, a Fortune 100 company and global leader in technology and manufacturing.

In 1996, Irma established the Irma M. Wyman Scholarship Fund at CEW+ (formerly the Center for the Education of Women) at U-M. More than two decades later, the fund has provided generous support to nearly 40 recipients in pursuit of degrees in engineering, computer science, and related fields at U-M. “Since my life had been transformed by a scholarship, I knew exactly what the impact of that was on a person. And being female, I wanted to assist other women who were perhaps getting into the same kinds of challenges that I was,” she said.

Irma passed away peacefully in 2015 at the age of 87, but her remarkable legacy remains on the Ann Arbor campus. Before her passing, she worked closely with CEW+ to establish a bequest adding over $2.5 million to her scholarship fund. “That scholarship has been the best investment I’ve ever made,” she said. “The returns have been so rich and satisfying to me, to the scholars, and to the university.”

At CEW+, Irma’s support has made a world of difference. “It is difficult to put into words just how much Irma has contributed to CEW+, and this bequest is such a fitting way to commemorate her pledge to smooth the path for women following in her footsteps,” says CEW+ director Tiffany Mara (MS ’98, PhD ’06). “Supporting generations of future scholars, this gift ensures that with each passing year we move toward a more diverse STEM workforce. The ripple effect of Irma’s legacy will be felt by many and offer a sustaining boost of confidence to draw from as scholars set out to engage in the challenging work of changing the world for the better.”

Today, Irma’s legacy at U-M is reflected in the accomplishments of dozens of students pursuing their dreams in STEM fields. “It’s a fascinating world out there,” she once said. “If your gifts and talents fit into the engineering world, there’s a lot you can do. You can really help humanity and do good things for people.”

Dolorence Okullo (MHI ’17) is one of many remarkable students who have benefited from Irma’s commitment to assisting young women in STEM fields. Okullo is a recent graduate of the Health Informatics master’s program at U-M’s School of Information (UMSI). Her work supports patient-centered information systems that promote standardization around the globe. In recognition of her work managing health information for AIDS patients and blood banks in Uganda, Okullo was awarded the Center for Global Health Director’s Global Health Strategy Award from the Centers for Disease Control and Prevention. Her experience eventually brought her to UMSI, where support from CEW+ and Irma’s scholarship made a world of difference in meeting her goals.

“I learned of CEW+ at a time when I was facing both financial and personal challenges that would not have allowed me to complete my studies,” she says. “Through CEW+ I received counseling and support, later applying for the Irma Wyman Scholarship. I received the scholarship during my final year of study and the funds lessened the burden of my tuition needs.” Okullo says the support she received was the push she needed to complete her degree and continue making an impact around the world.

“That scholarship has been the best investment I’ve ever made.”

For more information about how to include U-M in your will or trust, visit myumi.ch/lbGiftLegacy or call 734-615-2022.

BE A VICTOR FOR MICHIGAN 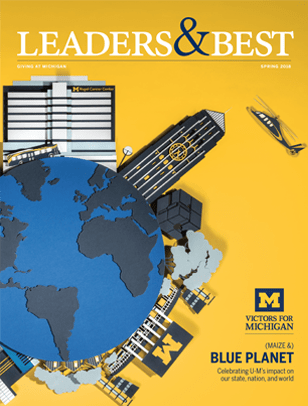