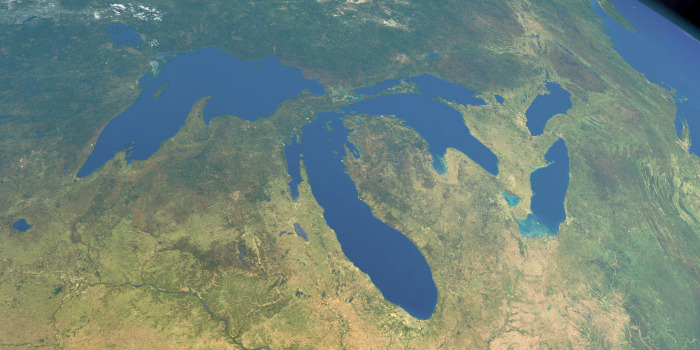 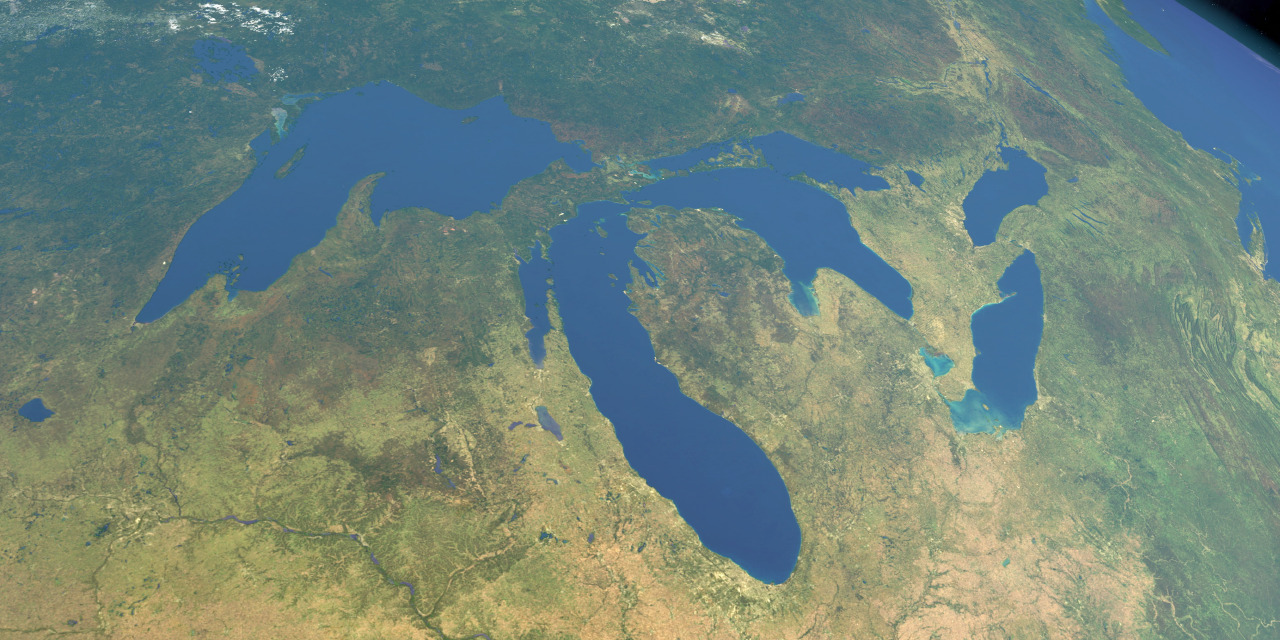 From the Great Lakes to its inland rivers and streams, hiking trails to golf courses, and lakeside cottages to campgrounds, the State of Michigan has long offered a near-endless number of natural resources to enjoy each summer—and a thriving tourism industry to prove it. But like with the rest of the country, and planet, the effects of climate change not only loom in the distance, but are here and causing real challenges to our ecosystem, and the outdoor recreation it provides, right now.

As University of Michigan researchers work to track, predict, and help us adapt to its effects, U-M is poised to help lead in reversing the root causes of the problems through donor-funded outreach work and collaborations with government and business leaders to make the state a global leader on climate change.

When it comes to recreation on Great Lakes beaches, Richard Norton sees two major challenges that are impacted by climate change. One is more closures caused by severe storms pushing untreated sewage into the water. The other is an unstable coastline that recedes and advances over the years, giving property owners a false sense of security about where it’s safe to build.

“People like to build in exactly the most beautiful, ecologically vital, and dangerous places,” said Norton, who is a professor of urban and regional planning at the Taubman College of Architecture and Urban Planning with a focus on coastal shoreline management.

To protect their investments, shorefront homeowners often build armoring structures, like seawalls, to slow erosion. Norton sympathizes, but said these “hardened” shores exacerbate the problem by encouraging more development, moving the erosion—spurred by intense storms caused by climate change—downshore onto neighbors, and closing off public access.

Norton’s work is focused on research for better development planning. By better understanding flood and erosion dynamics and working to educate and support the state and local communities, he hopes to improve their coastal management efforts.

“Climate change is only going to make those decisions that much more difficult and probably make them hit sooner than later.”

One class of organism that seems to be thriving under climate change is harmful cyanobacteria. Also called blue-green algae, these microorganisms produce slimy “algal blooms” in warmer, nutrient-rich waters. As the Great Lakes continue to warm and gather runoff from fertilizers and farm waste, toxic blooms have become common in Lake Erie, negatively impacting charter fishing, beaches, air quality, and even the drinking water supply in places like Toledo, Ohio.

Now, as more waters begin to warm, Gregory Dick, professor of earth and environmental sciences, said they’ve started to appear in other Great Lakes as well.

“The big surprise is that Lake Superior, which we always think of as the most pristine and the coldest of all the Great Lakes, has started to see harmful algal blooms in the last five years,” Dick said. “This was really unheard of previously.”

Understanding the conditions that favor harmful cyanobacteria versus benign types is central to Dick’s research at U-M and as part of the Cooperative Institute for Great Lakes Research. While much of the research helps forecast when and where blooms will occur so communities can prepare for and adapt to them, the long-term solution is to stop feeding the bacteria.

“The much more satisfying task is to develop policies and management strategies that prevent these blooms,” Dick said.

Other creatures inhabiting our state’s waters are having mixed reactions to warming. Karen Alofs, assistant professor in the School for Environment and Sustainability (SEAS), said warm-water adapted fish, like largemouth and smallmouth bass, are generally benefiting and spreading into new waters, while cool-water adapted species, like walleye and brook trout, are having a harder time as their habitats shrink.

“In the Great Lake states, walleye is really important, not just in terms of recreational fishing, but also for Native Americans,” Alofs said. “Over time, people might need to adjust their expectations in terms of how much walleye they’re catching and the way that we manage lakes. Some inland lakes are just not suitable for walleye to reproduce in anymore.”

Alofs and her research team are working with the Michigan Department of Natural Resources to study how water temperatures and genetics affect the metabolism, growth, and survival of stocked walleye. They are also collaborating on an Institute for Fisheries Research project to digitize and transcribe historical lake data from the last 100 years.

“I hope the work will inform choices,” Alofs said. “There’s a lot of power to actually having the empirical data and showing that change is already happening.”

Michigan has seen its share of extreme weather events in recent years, from heat waves to severe storms to flooding, and SEAS Dean Jonathan Overpeck said the forecast calls for more of the same—and worse—if things don’t change. As we continue to get more precipitation and rainfall, Overpeck said we can also expect longer and more intense dry periods, all of which adds up to uncomfortable conditions for enjoying our state’s natural resources.

While recent headlines spell out the toll drought and wildfires are taking on the Southwest, Overpeck said the weather processes causing the problem won’t be contained there. The atmosphere already holds more moisture than before, which has led to major storms and flooding. But when it’s not raining, Overpeck said it also demands more moisture from the soil and vegetation, which causes increased periods of intense dryness, the kind that leads to wildfires.

“Hopefully it won’t ever be as bad here, but if we don’t stop climate change, you can imagine a situation, particularly in Northern Michigan, where we have a severe wildfire problem.”

To Drew Gronewold, associate professor of ecosystem science and management at SEAS, one of the greatest climate challenges to the Great Lakes isn’t local to them. As the Southwest continues to dry up, Gronewold wonders how long the Great Lakes Basin can keep its water. If we’re going to avoid both a humanitarian crisis along with resource mismanagement, Gronewold said it’s going to take a lot of research and long-term planning from people like him and his team.

“What is the research we should be doing to make prudent decisions about how we distribute water in an equitable way within the Great Lakes Basin and across the entire country?” he asked.

In the meantime, increased precipitation is swelling the Great Lakes—the last 10 years marked the “wettest decade in recorded history” for them, Gronewold said—while higher water temperatures empty them at higher rates through evaporation. The net effect is a consistent average water level that isn’t expected to change much for the next few decades, even as it cycles through periods of radical highs and lows.

“If we don’t adapt to those extremes, people aren’t going to want to come and do tourism in the Great Lakes,” he said. “They’re going to say, ‘That was a waste of my money, because there was no beach,’ or because they couldn’t get out on a boat.”

It doesn’t have to be this way, but it’s going to take major changes in human consumption of fossil fuels to get to the root of climate change. That’s where Overpeck sees U-M, and the State of Michigan, as potential leaders, especially when it comes to electrifying the transportation sector and producing the batteries needed to run the future. To Overpeck, protecting the environment is also good for business. And it takes private investment to push both forward. While government funding enables the basic research and development to get things moving, it can only go so far.

“It doesn’t give you the money you need to really achieve maximum utilization of these great ideas and transfer them into entrepreneurship and enterprise and attracting talent to Michigan and building the economy,” Overpeck said. “All those kinds of things require private giving. Without private money, it’s impossible.”

Likewise, U-M’s Graham Sustainability Institute is working with local municipalities to identify potential wind and solar energy-generation sites across the state. When it comes to producing clean energy to power our communities, Graham Director Jennifer Haverkamp noted the importance of rural landowners, who have the real estate to host utility-scale, alternative energy developments. The institute partners with rural communities to optimize the environmental and financial benefits of those developments.

Like Overpeck, Haverkamp said private philanthropy is critical to collaboration. Founded in 2006 with a series of commitments from Donald (BSEIO ’55, MSE ’56, HDEng ’09) and Ingrid (BSDes ’57) Graham and matching funds from U-M, the Graham Institute helps incubate, coordinate, support, and administer new sustainability initiatives.

Donald Graham’s own love for Michigan’s natural resources was instilled at a young age by his father, Samuel A. Graham, who taught at what was then U-M’s School of Forestry and Conservation for 33 years. Each summer, Donald Graham would spend months in the Upper Peninsula at U-M’s forestry camp in Iron River, where his father taught.

“I literally grew up in the wilderness of the U.P.,” Graham said.

A sensitivity to environmental issues stayed with him. In the early 2000s, he started working with university leaders to explore ways to accelerate environmental work being done at U-M, focusing on breaking down silos.

“Problems like climate change cannot be solved from a single disciplinary perspective,” Graham said. “Technical considerations must be balanced with legal, policy, financial, and other considerations. It’s about finding ways to fund, promote, and help collaboration, because no one is going to solve the global warming problems in their closet.”

Through gifts like those made to the Graham Institute and SEAS, the Grahams have helped drive that collaboration.

“Not only have we fostered and facilitated new partnerships between University of Michigan scholars from across the schools and colleges, but we have brought that expertise to the communities that can use it,” Graham said. “In turn, we have learned from those community partners and, as a result, our real-world impact is new interventions, better use of resources, and development of pathways to a more sustainable future.”

Support programs focused on the environment