For a man who has seemingly done it all, Charles Woodson (School of Kinesiology ’97, HLLD ’18) remains remarkably humble. Woodson—who accepted an honorary Doctor of Laws degree and delivered U-M’s Spring Commencement address in April—is no stranger to accolades. When the thing you resent most is being on the sidelines, the awards just tend to pile up.

But a celebrated life’s journey began with modest origins. As an infant, Woodson was diagnosed with clubfeet. He was required to wear a pair of corrective braces that barred his legs in place and prevented him from playing with his siblings. For much of his early life, a boy who would one day be known for his ability to make spectacular leaping interceptions was—more or less—forced to stay put.

The infant superstar-to-be howled and shrieked. He wailed for freedom. But it was thanks to the early intervention of pediatric medicine that Woodson was able to make a full recovery. Soon, the braces came off. The boy stood up. And with plenty of pent-up energy, he was immediately drawn to sports. The rest is a celebrated chapter in football history. But the most remarkable thing about Charles Woodson may be that football is only one part of his story. Childhood wouldn’t be his last brush with pediatrics.

At U-M, former head football coach Lloyd Carr was known for encouraging his student-athletes to visit C.S. Mott Children’s Hospital in their freetime. He asked this small act of service of his players, a way to give back and lift the spirits of those who needed it the most. Woodson was no exception. Maybe owing to his own childhood, his experiences at Mott impacted him deeply. Long before he was a Heisman Trophy winner and a star of the National Football League, Woodson knew that athletics wasn’t his only calling.

When U-M reached out in 2003 to ask if Woodson would help raise money for a new facility, there was no hesitation. “He didn’t blink,” says Valerie Opipari, a pediatric oncologist and chair of the Department of Pediatrics and Communicable Diseases at Mott. “He helped us to raise $75 million for this building. It would not have happened [without him]. There was no single person who gave more of their time and effort to making the case for Mott Hospital than Charles.”

And he didn’t stop there. “Around 2008 when the building was taking shape … he said to me, ‘I want to do more. I want to be a role model,’” Opipari recalls. It was then that Woodson pledged $2 million to clinical research at Mott, a landmark gift that has empowered researchers and improved patient care. “It’s a really remarkable legacy he’s built,” Opipari says—a legacy that began with a student-athlete spending time with Little Victors.

“My motivation for supporting Mott is really just from being in that hospital,” Woodson says. “Being around the people there, especially those who are patients… they’re going through tremendous things that, a lot of the time, they don’t have an answer for. They’re just searching. Searching for anything to make things better or to save somebody that they love. They’re searching for hope.”

Talk to almost anybody at Mott, and they’ll tell you that they’ve found hope in Charles Woodson. Years later, the expressions of gratitude continue pouring in on social media and in person. Woodson can’t seem to go anywhere without meeting a grateful fan. But in the face of well-earned praise, he’s quick to acknowledge that his is only a small part of a much greater mission.

“When I think about the hospital, I think about the doctors, the nurses, the researchers,” he says. “I’m able to be a voice and a face, so to speak. But that’s the easy part. The hard part is done by the people who are at the hospital each and every day. The hard part comes for the patients who have to fight through the things they’re fighting through. What I do is just a small part.”

Woodson continues playing his part today. He offers ongoing support at the annual Event on Main, which raises funds for the Charles Woodson Clinical Research Initiative at Mott. The young man who once spent his autumn Saturdays inspiring thousands at the Big House remains a celebrated presence in Ann Arbor. Once considered an elder statesman of the NFL, Woodson is now an ambassador for philanthropy and social activism at his alma mater. A champion for hope.

On giving back, he offers a simple message. “For everyone, I think that you find your moment,” he reflects. “There will come a time when you’re sitting in your home or in your car, wherever you may be, and you’ll say, ‘You know what? It’s time for me to stand up and get involved.’ Everybody has their time. When that time comes, you’ll feel it.”’

For more on Woodson and his presence at Mott 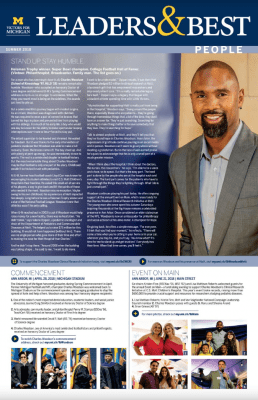 A Conversation with Dean Jonathan Overpeck

Adding It All Up

For Journeys and Dreams

John Varriano, Jr. (AB ’65, AM ’66, PhD ’70) arrived in Ann Arbor in the early 1960s, a doctor’s son with dreams of becoming a writer. At U-M, he majored in English, made friends with faculty in the Department of Art History, and dabbled in architecture for good measure—a true Renaissance man.
Published 1.5.2018
Read the Story