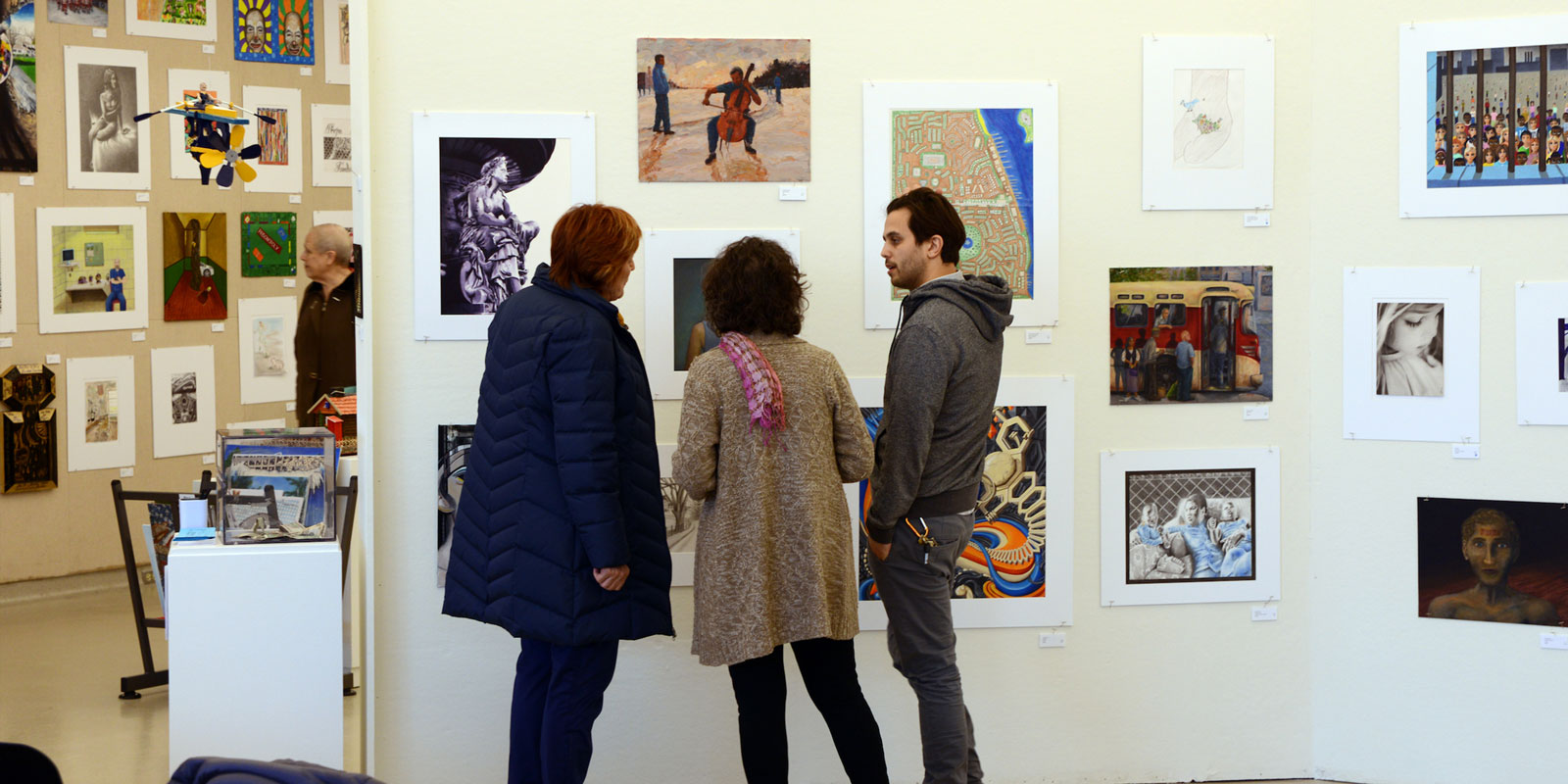 In Andrea Scott’s (AB ’70) living room, there is a 3-foot-tall sculpture of a robot. It’s made almost entirely of cardboard with a few pieces of plastic adorning the structure, but its bronze and charcoal colored exterior make it look like metal.

“When I spotted the robot from across the gallery I knew immediately that I wanted this piece,” Scott said in a recent Zoom interview. “When I learned it was made primarily of cardboard, and read the poem that went with it, there was no question in my mind that this was a totally unique piece of art.”

The robot sculpture and accompanying poem by Thomas Gordon, titled, “One Forgotten Part” is one of the many works of art Scott has purchased over the years from incarcerated individuals participating in the Prison Creative Arts Project (PCAP). Scott, the chair of its Development Board and a loyal donor to the program, has been with PCAP for nearly two decades.

“There are so many talented men and women who are behind bars, it’s remarkable. I have art all throughout my house that I’ve purchased at the Art Exhibition,” Scott said, describing one particular wall in her home dedicated solely to portraits created by PCAP artists.

I think especially on a university campus, it can be unusual to find an organization that’s really bringing people from all of those groups into the same space to do work together as equals.

What began as a single theater workshop has grown to include undergraduate courses, programming and curating opportunities for students, literary publications, arts workshops, and events, including the renowned Annual Exhibition of Art by Michigan Prisoners—the largest curated show of prisoner art in the world, which reaches thousands of people each year.

This year celebrates the 25th anniversary of the exhibition, which showcases and sells art from every correctional facility in Michigan. All proceeds from art purchased at the show directly support PCAP artists. The 2020 exhibition was originally planned for March 18 – April 1, 2020 at U-M’s Duderstadt Center Gallery, but then the coronavirus hit the state of Michigan. When Krinitsky learned they would be forced to postpone the show, she swiftly rallied PCAP staff and students to move the exhibit online in May while they explored options to reschedule an in-person event at a later date.

In June, Krinitsky announced PCAP’s decision to reschedule the exhibition at the Duderstadt Center Gallery for March 2021, featuring the art selected for the 2019-20 show along with more recent works. Although the art won’t be available for purchase until the gallery opens in March 2021, the public can view the online version of the show and leave comments for the artists in the digital guestbook.

Artists in the exhibition represent a wide array of ages, ethnicities, and socio-economic backgrounds.

And the art is as diverse as the artists themselves, from landscapes and portraits to political statements and works of 3D art, such as the piece created by Steven, a prisoner at the Cooper Street Correctional Facility in Jackson, MI. Steven’s 3D piece, “Prison Rich,” one of the artworks selected for this year’s show, features a pair of shoes graffitied with acrylic ink, adorned with thread and a plastic cable tie to depict the relocation process when moving between facilities within the prison system.

In just over two decades, the exhibition has grown from featuring fewer than 100 works of art to now boasting over 800 pieces by incarcerated individuals. Its success is in part due to a team of U-M students, staff, faculty, community members, and local artists—some of whom are formerly incarcerated artists—who help collect the art and curate the exhibition. Led by PCAP’s Arts Programming Coordinator Graham Hamilton, the team drove nearly 4,000 miles this past fall to 26 prisons across Michigan in search of the best works of art created by prisoners.

Bryan Picken, released last January after 16 years of incarceration, had two acrylic paintings selected for this year’s exhibition: one of a bird warrior woman and another of a samurai.

“The samurai piece was just for fun,” Picken wrote in his artist’s statement. “The choice of no background is meant to emphasize the character. I felt it brings more focus to where my eye dwells when looking at my subject matter.”

PCAP’s growth is just one indicator of the creative energy flowing through prisons across the state, Krinitsky said.

“I think it’s sometimes surprising to folks who are new to PCAP, or prison work in general, just how much creativity, production, and new, exciting ideas come out of prisons,” she said. “Sometimes [prisons] can be kind of portrayed as static places where people are housed, but not much is happening—which is so far from the truth.”

Transformative experiences like PCAP’s Art Exhibition touch not only the lives of the artists, but also the lives of the students, faculty, and staff who work with the program. Through PCAP, U-M students learn how to facilitate workshops held inside the prisons and work directly with incarcerated people on writing, dance, music, visual arts and more, all while learning about issues surrounding the American prison system and gaining practical skills in the arts.

Hannah Agnew, an incoming graduate student in the School of Social Work, has been involved with PCAP since her first year at U-M, helping to curate shows, facilitate workshops, and create art with prisoners. “The learning experience is what made PCAP one of the most profound experiences of my college career,” Agnew said.

It was life changing—not only learning about their resilience, but also learning about poetry, painting, improv, and more from people that have been discredited in so many ways, but are so important and so incredibly talented.

Agnew’s work with PCAP has inspired her to pursue her master’s degree in social work and continue working with incarcerated individuals. And when COVID-19 forced the cancellation of in-person workshops, it was students like Agnew who rallied to ensure PCAP artists stayed connected to the U-M community and continued sharpening their artistic skills.

In partnership with PCAP leadership, members of the student executive board created the Mutual Aid Project, an initiative that has made it easier for PCAP participants on both the inside and outside to support each other during the pandemic. So far, the project raised $18,540 of its $22,000 goal and provided financial aid to 80 people.

“It was important for us to contribute in some way when we were barred from going inside the prisons and seeing the people we love working with and creating art with,” Agnew said. “It felt good to see that there was some way we could contribute meaningfully during a really difficult and restrictive time.”

Over the years, generous support from donors has helped to fund PCAP’s full range of academic, artistic, and community activities, including the Art Exhibition; the Linkage Project, PCAP’s re-entry program; and student-facilitated workshops. While it remains uncertain if workshops and other activities inside prisons will soon be able to resume, Krinitsky said they’re partnering with donors and university leadership to continue offering the creative programming and resources that many people so desperately need right now.

PCAP’s impact can be found beyond prison walls through programs like the Linkage Project. A re-entry program within PCAP, the Linkage Project connects adults returning from incarceration with potential jobs and artistic opportunities as they try to navigate a new normal.

“Reentry is such a difficult process,” Krinitsky said. “Some of the most important types of support people need when they come home are stable housing, reliable employment, and a supportive family or other network to stay connected to. So one of PCAP’s goals is to make these necessities more accessible.”

For Joseph Johnson, who was recently released from incarceration after 38 years, PCAP has helped him move forward.

“What I’ve found since being home is that people are more kind and willing to give you an opportunity as long as you’re willing to help yourself,” Johnson said. “PCAP offered me assistance without knowing anything more than that I was a returning citizen in need of assistance. I think more people can benefit from organizations like PCAP that are committed to you successfully leaving prison and reentering your community.”

Whether inside or outside of the prison system, everyone needs opportunities for creative expression and connection, and through PCAP, incarcerated artists and the Michigan community are able to enjoy these opportunities together.

“Our organization believes that creativity is a human right,” Krinitsky said. “Regardless of where you live or what you’ve done in your past, you have the right to create and to express yourself by making new things that didn’t exist in the world until you made them.”