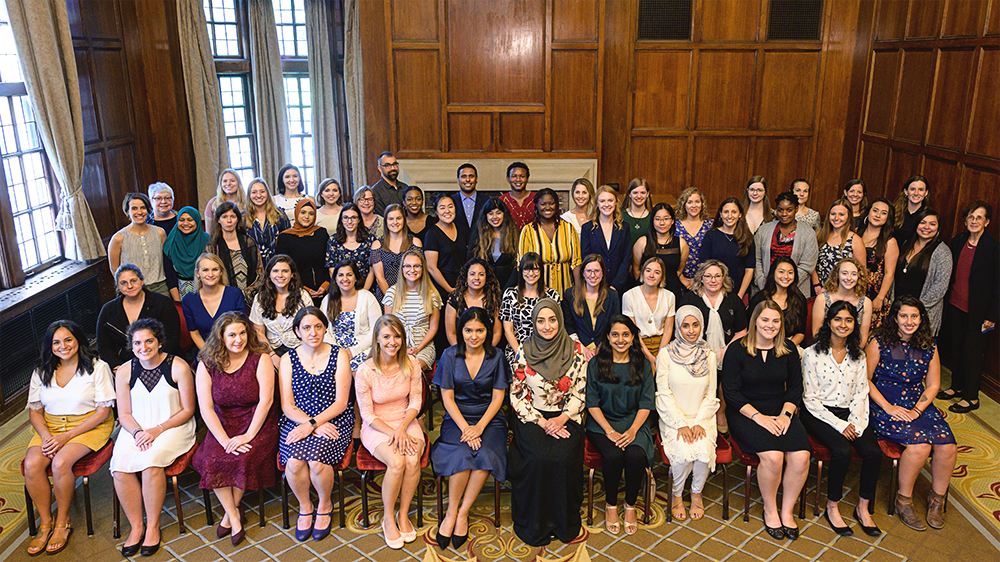 Since 1970, the University of Michigan’s Center for the Education of Women+(CEW+) has provided more than 1,800 scholarships to Michigan students. To celebrate fifty years of CEW+ scholarship support, Leaders & Best takes a look back at the center’s history and the bold women who helped found it.

Postwar America saw an increasing number of women in the workforce and more women attending university than ever before. American society was evolving—but universities across the country were slow to adapt to these changes. On the one hand, many women were receiving college degrees. On the other hand, there were substantial roadblocks for a lot of these women. U-M had come a long way since it first opened its doors to women in 1870, but there was still work to be done.

Louise Cain, Jean Campbell (HLLD ’10), and Jane Likert were no strangers to the challenges facing women continuing their education. As wives of U-M professors with families of their own, they were particularly attuned to the disadvantages for at-home mothers whose educational journeys had been interrupted by the demands of domestic life. What they witnessed on campus sparked an idea to revolutionize how universities supported women students.

Turning the tide of an inequitable system, however, was a daunting prospect. “There was nothing going for us but our determination,” reflected Campbell. But they persevered, drafting a proposal for a new hub on campus that could provide women with resources to flourish in their education and careers. After revisions and negotiations, President Harlan Hatcher agreed to establish a university center for women, under the terms that U-M would cover half of its operating costs while the other half would have to be fundraised.

The center was taking form, but where was all this money going to come from? Cain, Campbell, and Likert reached out to the U-M community for support; and in true U-M spirit, the Michigan Alumnae Council answered the call. In collaboration with other community groups, the council raised more than enough money to establish the center.

CEW+ began in a modest two-room space at the Michigan League, where it offered academic and professional advising sessions and training workshops. But for all the advice and skill-building it provided, the center knew the financial cost of continuing education remained a significant hurdle for many women.

At the time, U-M only offered financial aid for full-time students, and academic scholarships and awards were few and far between. This policy had the greatest impact on at-home mothers, who comprised the majority of Michigan’s part-time students.

CEW+ envisioned a structured scholarship program that could meet the financial needs of women who were not supported by the university’s scholarship structure. But there was no money in their budget for scholarships. Faced with another financial obstacle, CEW+ looked once again to philanthropic support to fuel its impact.

Six years after the center was founded, it was poised to launch the CEW Merit Scholarship program.

The center gathered momentum in the early 1970s from America’s growing social and political consciousness. It was the age of Vietnam protests, race riots, second-wave feminism, and other movements that placed the nation’s values on trial and fueled myriad discourse surrounding human rights. In addition to its focus on counseling and financial support, CEW+ hosted a number of activities, from local study groups to academic conferences, that established U-M as an incubator for discussion and research about women’s roles in higher education and the world at large.

What began as three women’s ambitious vision quickly grew into a university hub unlike any other in the country.

Over five decades, CEW+ has expanded in size and programming as it evolves to meet the changing needs of the U-M community in the twenty-first century. Today, the center offers a wide range of scholarships and fellowships for students from all walks of life. Its abiding mantra is, “No matter where you’re from, you belong here.”

CEW+ also carries on its founders’ vision to encourage and enable women to achieve their educational and career goals.

“They say it takes a village to raise a child, and it also takes a village to support a mother to reach her dreams,” said Grace Han (Medical School Class of 2022). “CEW+’s investment in me helps me afford childcare so I can spare a few more hours to study, relieves me of some of the heavy financial burdens that come with being a parent in Ann Arbor, and allows me to learn from, serve, and advocate for the women who need access to quality healthcare the most.”

Grace is a recipient of the Sarah Winans Newman Scholarship, named after Professor Emerita Newman, a long-time CEW+ advocate and professor in the Department of Anatomy and Cell Biology at U-M’s Medical School. Many of CEW+’s scholarships are supported by and named in honor of remarkable individuals who have embodied the center’s mission in their own lives. “It’s exciting for me to have the opportunity to interact with these hard-working and appreciative students,” said Newman. “To know that one has been able to work with these students to attain their goals is truly rewarding.”

For almost two decades, the Newman Scholarship has supported women in biological and biomedical sciences, a field Dr. Newman devoted much of her life to advance.

CEW+ has become a fixture in the history books of American postwar education. Its story is a reminder that Michigan is what it is today because of bold individuals who have measured U-M not against the status quo but against the highest ideals of a public institution.

*This article’s historical account of CEW+ comes from Jeanne E. Miller’s A Matter of Fairness: A History of the Center for the Education of Women at the University of Michigan, 2014.