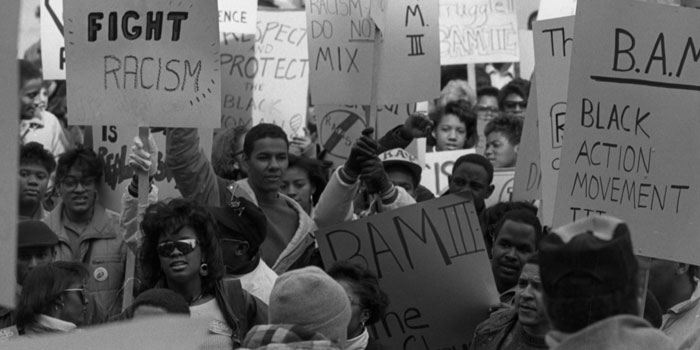 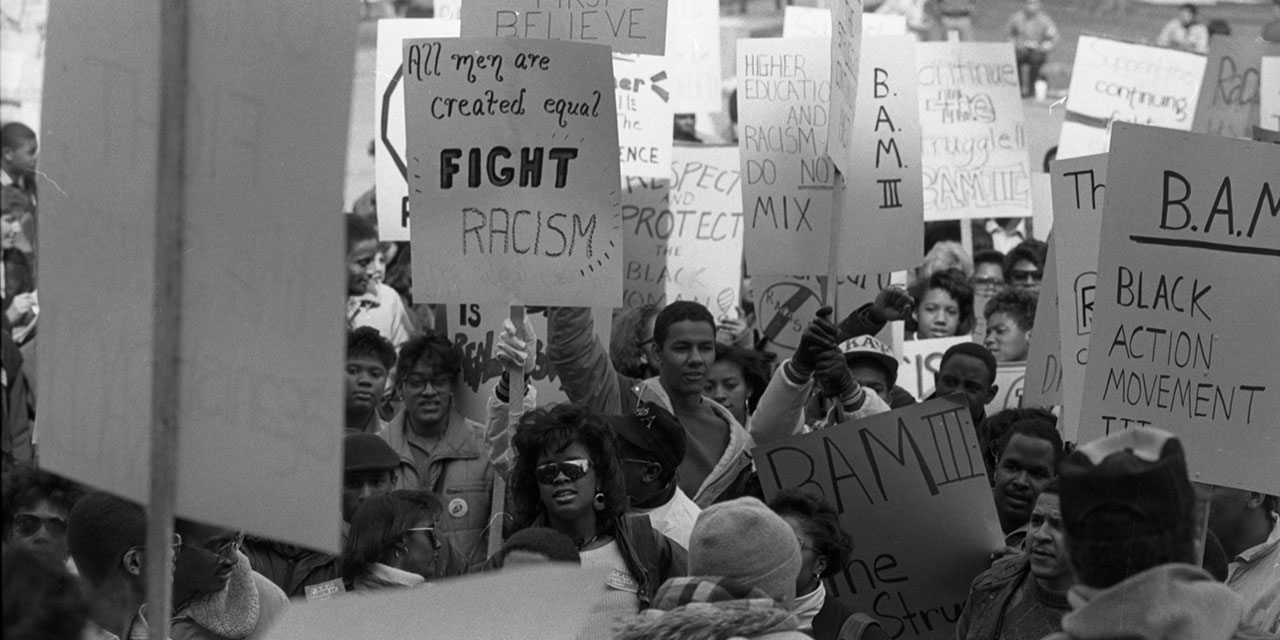 What it Meant to Me: Robert Sellers

From All-American football player at Howard University to graduate student activist at the University of Michigan to the university’s inaugural Chief Diversity Officer, Robert Sellers (Ph.D. ’90) has risen to the daunting challenges surrounding him. His extraordinary humility belies his tremendous accomplishments, which include the creation and implementation of U-M’s first strategic plan for diversity, equity, and inclusion (DEI). In “What it Meant to Me,” where we invite some of U-M’s most revered alumni to tell their Michigan stories, Sellers shares his campus experience and gives his views on how DEI principles are vital to the fabric of everything the university does–including development. 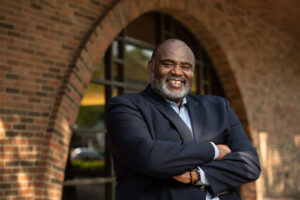 Looking out from my office in the Fleming Administration Building, I can’t help but wonder whether it’s irony or destiny that my first time in this building was for a sit-down strike in 1987, protesting the university’s lack of commitment to address racism on campus.

I was in my second year as a Ph.D. student in the Psychology program and had just become President of the Black Student Psychology Association (BSPA). I found myself swept up in the Black Action Movement (BAM) III and United Coalition Against Racism (UCAR) movements that were quickly gaining momentum on campus.

In February of that year, news broke about racist and sexist jokes on the campus radio station WJJX, along with several other racially charged incidents. One month later, frustrated with what we saw as a lack of action, the BAM III began, calling for a 24-hour boycott of the Union, occupying the Administration Building overnight, and shuting down a Regents meeting with demands for action on a dozen anti-racist proposals that had been presented earlier in the year.

Interestingly, one of the results of these protests was the creation of the Office of Minority Affairs; that later became the Office of Diversity, Equity & Inclusion, which I would come to lead in 2015.

It was actually because of the BSPA that I came to U-M. I was pursuing my undergraduate degree in psychology at Howard University and one of my advisors encouraged me to attend a recruitment event with a graduate student from U-M’s BSPA. I knew U-M had an outstanding psychology department, and I learned about its strong support, historically, for African-American graduate students in that department. The BSPA had a history that went back to 1968, to the first Black Action Movement. Thus, they had been actively recruiting black students for 15, 16 years prior to me. When I got to campus, one of the first things I wanted to do was get involved with BSPA and I ended up serving as president. So, it all kind of fits.

One of the things I learned as a student leader and activist was the importance of building structure. It’s one thing to raise awareness and to voice outrage and the need for change, but it’s extremely important that you change institutions in ways that are long-term and sustainable. One of the things I’m most proud of about my time as a student is a group we started now known as SCOR (Students of Color of Rackham)–previously Minority Organization of Rackham (MOR)–and more than 25 years later, it still plays an important role in meeting the needs of graduate students of color on our campus.

After receiving my Ph.D. and a 7-year stint at University of Virginia, I returned to Ann Arbor to further my research and continue teaching. To me, U-M has that kind of a spirit where not only could I thrive in terms of my scholarly work, but also have the chance to work toward more access and opportunities for traditionally underrepresented students. Those students coming to Michigan and earning a Michigan degree would be able to go anywhere afterward. We often talk about all roads leading to Michigan, when you run into alumni all over the world. The reverse of that is also true–that all roads leave from Michigan to anywhere you want to go.

My tenure as vice provost has been so rewarding, just having been given this opportunity, and I’ve been blessed to work with a tremendous team and larger university community that has been doing this work for 20, 30, 40 years, oftentimes in spaces that have not been as visible.

I’m probably most proud of the DEI strategic plan process that not only legitimized, but institutionalized those efforts and those voices that have been there awhile. Now DEI is not only a core value of the institution, but it’s moving toward becoming standard operating procedure. I think we’re well on the way for this institution to make the long-term structural changes that I learned were important so many years ago as a graduate student.

We still have a way to go to become the university that we can and need to be, but you no longer have to make the case for DEI at Michigan. We can argue over what we should do and whether this is the right way, or whether we’re doing enough or we’re doing too much, but you no longer have to make the case that DEI is and should be a core value of what we’re doing. I am sure new challenges will come up in the future that we will have not yet thought of, but I believe that the strategic plan provides us with a structure to address them head on. I guess I’m most happy with the idea that we are in a much better place to become a more diverse, equitable, and inclusive community than we ever have been.

My work has also reinforced my belief in and commitment to DEI principles as a critical part of philanthropic efforts. I think it’s a great opportunity for us to, once again, be leaders and best, by having DEI really be part of the DNA of the next fundraising campaign. As we work on various campaign goals and themes, I don’t think there is a single one of them for which there’s not an important DEI component. If the university is going to continue to be amongst the very best in the entire world, we need different perspectives, we need different ideas. Those different ideas really come from different lived experiences in the world, which are often tied to different social identities.

Giving is also really important, not only in terms of the fiscal benefits that it provides, but for the really important brain trust our donors provide for the university. Many administrators on campus have advisory groups that work with donors to provide advice and perspectives. These advisory groups provide administrators with expertise, as well as a temperature-check of what’s happening in the world.

I work with my advisory council not only to find ways to provide more support for DEI, financially, but also as a sounding board for me and my team. My advisory council provides me with important perspectives, and I know that’s the same with the presidents, the deans, the provost, and others. It’s so important that the influence is also diverse, that it comes from diverse perspectives. And so by opening up and having DEI be a fundamental part of our development space, we’re also opening up access and influence within the university.

Traditionally underrepresented groups often have had experiences on campus that are difficult and sometimes unwelcoming. For many, it hasn’t always been easy to embrace the university, or at least not all of their experiences at the university. Yet, we want everyone who is here to feel and know that the University of Michigan is their university. An important part of that is philanthropy. One doesn’t have to have billions of dollars to be a donor to the university. Being a donor is more about being connected to one’s university. It is about being connected to the future generations of U-M students who are like you and making sure that they can get the very best educational experience U-M can provide. By opening up and infusing DEI in our efforts to reach out to donors at various levels, we’re also increasing that sense that this university belongs to all of our students and our larger community. Our efforts are trying to convey the message that the university’s future is tied to you and that we need you, so we can be the best that we can be.

I myself have supported initiatives including the Rackham Impact Fund; the George Floyd Memorial Scholarship; and Wolverine Pathways, a college readiness program I helped launch in 2015, because, on a personal level, my Michigan education opened doors that most other places would not have. I feel a sense of obligation to make sure that those who come behind me have more access and more opportunities than I had. And hopefully we instill in them that same sense so that the opportunities only increase as we move into the future. Having a Michigan degree means that any room that I step into, there’s instant credibility, and that’s particularly important for members of traditionally underrepresented groups.

I was blessed to have two outstanding parents who were very active in the community and who very much instilled in my brothers, sister, and me that we had a responsibility to not only be successful ourselves, because of the opportunities that we had been given, but to make sure that wherever we went, that that space was better for those who were coming after us than when we got there. They stressed that those two things went hand in hand; you couldn’t do one and not do the other, and think that you had fulfilled your obligation to all that had been given.

Every place that I’ve gone, I’ve had people who have looked out for me. And so, if nothing else, I have a clear sense that I would not be here if it weren’t for so many other people who just went out of their way to make it happen. And I’m grateful to still be at a place like U-M that gives me the opportunity to honor that responsibility every day.

William and Inger Ginsberg (above) honor parents Edward (AB ’38) and Rosalie Ginsberg with a gift to support a new building to house the Ginsberg Center for Community Service and Learning.
Published 3.24.2022
Read the Story