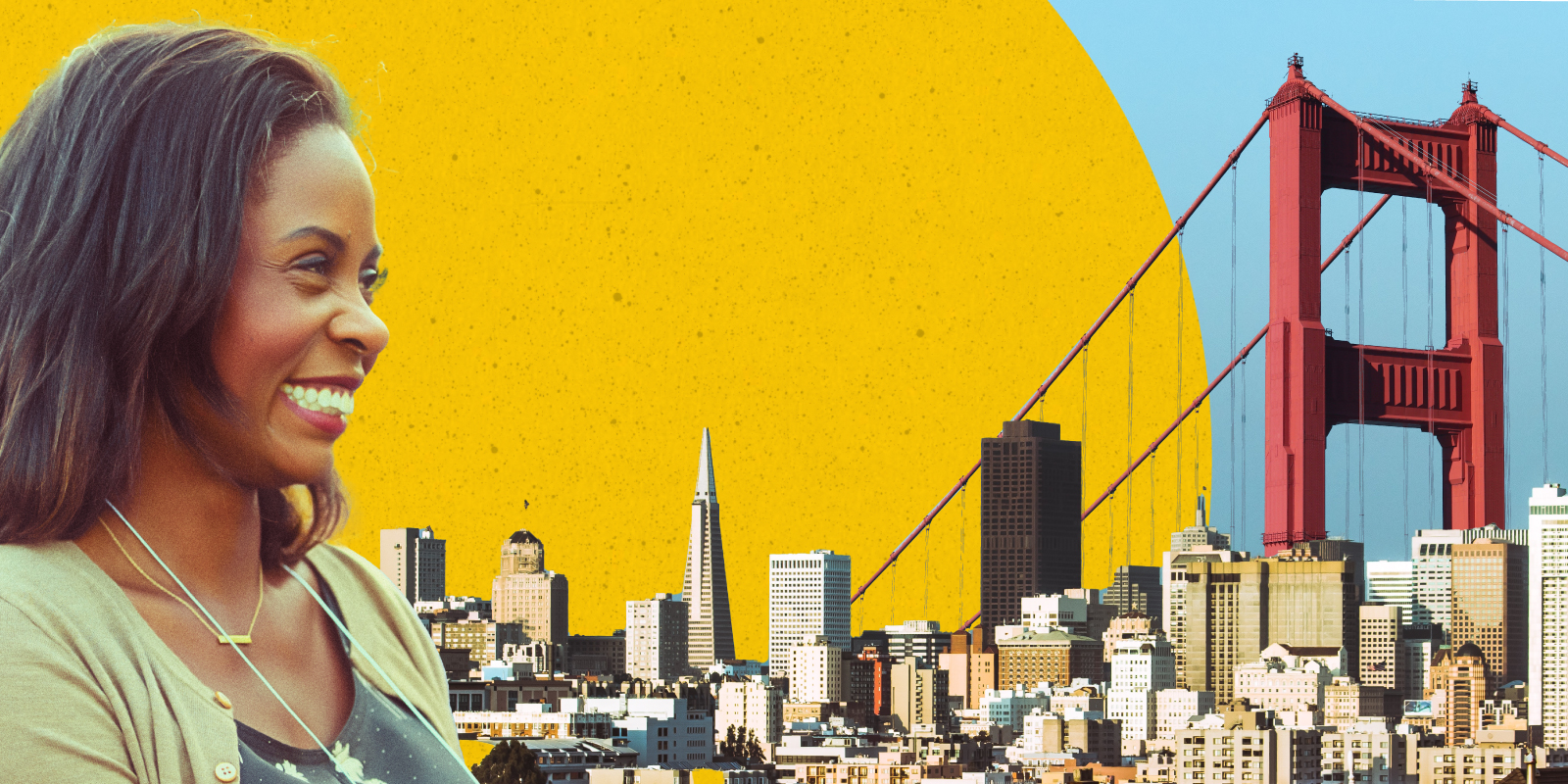 Winning Together: A Conversation with Brandi Hudson

Brandi Hudson (AB ’01) was one of Michigan’s great track and field athletes. Now she is a mother, vice president, wife, philanthropist, and among the university’s most engaged alumni. Earlier this year, Leaders & Best had the opportunity to sit down (virtually) with Hudson for a special conversation. We talked about breaking Big Ten records, navigating medical sales during a global pandemic, changing the landscape of Michigan fundraising, and more.

It’s 1:01 p.m. on April 28, and Brandi Hudson appears on my Zoom screen wearing a Michigan t-shirt, red lipstick, and a big smile.

Hudson lives in San Francisco with her husband Charles and their three-year-old son Charlie. She is a vice president for sales at Inspire Medical Systems, a Minneapolis-based medical company that makes an implantable device for sleep apnea.

One reason Hudson is so good at sales is because she hates to lose. It doesn’t matter if it’s a quarterly quota or a game of monopoly, “I’m literally competitive about everything,” she said. “It’s in my blood.”

During quarantine, the competition has moved online for Saturday night trivia against her husband’s college friends. To her chagrin, it’s one of the only games she hasn’t figured out how to win…yet.

When we spoke, Hudson was in the midst of navigating COVID-19 with sales representatives and managers. Her team covers the West Coast and spans from Montana to New Mexico. To make matters more complicated, each state was holding different guidelines for elective surgeries and other healthcare procedures. She was doing her best to find the silver lining in it all.

“Every night, Charlie and I say the three things we’re most grateful for,” she said. “I am very fortunate for my job and family, and the virus is a reminder for me to focus on the positive things, like being able to spend more time with my boy.”

Brandi Hudson grew up in Detroit and went to Marian High School in Bloomfield Hills, where she fell in love with track and field. By senior year, her college choices were narrowed down to Stanford and Michigan: the only two schools, in her mind, that offered the best of athletics and academics. Ultimately, she decided to stay closer to home.

Hudson wasn’t a highly recruited athlete. She arrived in Ann Arbor on a  small track and field scholarship—which amounted to about a semester’s worth of books. She wasn’t even sure if she would make the travel team. But with a passion to win and her sights on a full-ride scholarship, she went to work.

“I spent six days a week at the track working out and another three mornings a week lifting weights,” she said. “There were a lot of parties I didn’t go to and drinks I never had, but I was determined to be the best I could be.”

Before long, Hudson was traveling with the team, topping leaderboards, and winning track meets. Her longest jump in competition measured nearly 22 feet, which earned her a Big Ten and U-M record that she held for years. By her senior year, she received a full-ride scholarship.

Four years and a few championships later, Hudson traded in her track spikes for a career in health care.

“I always knew I wanted to help people and have been passionate about that since I was little,” she explained. “But I also love a good competition, and I think I’ve found the perfect intersection in health care sales.”

After graduating from the College of Literature, Science, and the Arts with a degree in organizational studies, Hudson spent a few more years working in Michigan and then Georgia, before her career led her to San Francisco.

A month after moving to the Bay Area, she met a Stanford alumnus from Detroit. As it turned out, they had a lot in common: same age, high schools in the same town, and almost attended the same university. “My friends kept telling me I had to meet this guy,” she said. “The first time we met, I remember thinking, ‘Okay, he’s pretty cute,’ and I suppose the rest is history.” In 2015, Brandi and Charles tied the knot. 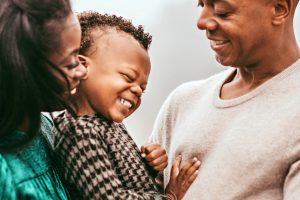 Charles Hudson is the managing partner of Precursor Ventures, a classic seed stage investment firm in San Francisco. He’s also a proud supporter of his alma mater. I ask if there are any Michigan-Stanford rivalries in the family, and Hudson says no, not really. But then with a wink, she admits to dressing Charlie in more maize and blue than Cardinal red and white.

As Brandi and Charles have settled into life on the West Coast, they have become increasingly active philanthropists and volunteers, from serving on the Saint Francis Foundation’s and the San Francisco Opera’s leadership boards to supporting and engaging alumni at their alma maters.

In 2017, Hudson endowed the Brandi and Charles Hudson Women’s Track and Field Scholarship at U-M in honor of her coaches and teammates. “I went from a small, Catholic, girls high school to a university of over 40,000, and I had no idea how to navigate that,” she reflected. “And the amount of support from my coaches and teammates was so meaningful for me.”

After endowing a scholarship, Hudson began researching more about philanthropy at Michigan. She discovered that African American alumni were among Michigan’s most under-engaged philanthropic groups.

“It was really shocking for me because I personally knew so many successful African American alumni,” she said. “And I just started thinking about what it would look like to better engage and partner with this cohort of individuals.”

So Hudson began brainstorming with her regional gift officer, Ryan Robinson,  and sparking new conversations across the Michigan family. It often starts with a

story, she explains to me. People give to what they are passionate about, to what has shaped their own lives. And it’s the job of a university to help foster those connections, she said. “We really need to meet people where they are.”

Soon, an African American Giving Initiative was in the works.

Months later, Hudson was in Ann Arbor for the weekend of the Michigan vs. Michigan State football game. She was watching the game near President Mark Schlissel and wanted to talk to him about her vision for a brand new giving initiative.

“It was at the end of the game right before everyone was about to leave, and I saw my opportunity and went for it,” she said. “I think it was the salesperson in me that wanted to sell him on the idea.”

Schlissel not only liked the idea but even invited Hudson and the initiative’s working group to his house to discuss the project further.

“Everyone I have talked to has received this with open arms,” Hudson said. “And that is a testament to Michigan’s leadership, how willing they are to get behind something driven by alumni and volunteers.”

The university has always leaned on the strength of its people. Hudson explains how her work is, in many ways, retracing the steps of Jean Fairfax (AB ’41), a longtime U-M donor and one of the twentieth century’s most poignant philanthropic voices.

“I would be remiss if I didn’t mention Ms. Fairfax. My goal is to pay homage to her and her foresight in seeing how important it was that African American students and alumni feel connected to the university,” Hudson said. “Though she passed away before I had the chance to connect with her personally, I have spoken with those who knew her well, and I think she would be really proud of the work we are doing.”

While COVID-19 may have put a temporary pause on the official launch of U-M’s African American Giving Initiative (which was scheduled for June 2020), it hasn’t stopped Hudson and others from keeping the ball rolling.

As our conversation winds down, she tells me she really hopes alumni and friends read this story and are compelled to reach out. “I’d love to be able to invite the African American Michigan community to connect with me, whether it’s via phone, email, or even a Zoom call, like this,” she said.

For the former track star, winning at philanthropy isn’t quite like setting long jump records or reaching sales quotas. It’s a different kind of success.

“We just want to get as many people involved as possible, and it’s incredible how many people have already been receptive to it,” Hudson said. “There is a real opportunity to give to our amazing university, while being a voice for the students, faculty and staff. I hate to oversimplify it, but sometimes all you have to do is ask.”

Connect with Brandi at aa-giving@umich.edu

A Conversation With Athletics Diversity Equity and Inclusion
MORE: STORIES OF IMPACT

U-M alumnae Andrea Joyce (AB ’76), of NBC, and Tracy Wolfson (AB ’97), of CBS, talk about their sports broadcasting careers, the importance of Title IX, and why they give back to Michigan.
Published 9.13.2022
Read the Story